Looking At Nature and Observing Oneself
Henry Wadsworth Longfellow 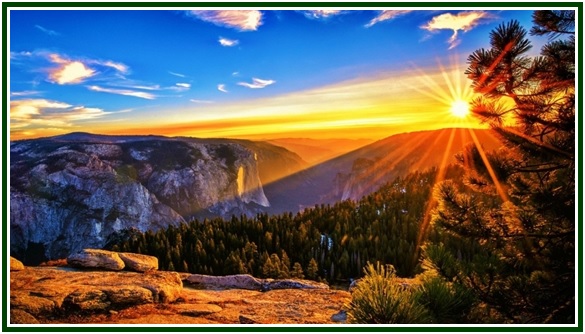 The heart-consciousness in human
beings is linked to the energy of the Sun
0000000000000000000000000000000000000
Editorial Note:
No clear borderline divides
philosophical poetry from esoteric
wisdom. In the ancient world, both
Eastern and Western nations used to record
and to memorize religious teachings in the form
of verses. At all times, good philosophical poems
seem to directly speak to one’s higher levels of
consciousness. As to the following poem, it should
be taken into consideration that the whole Nature is
seen as divine, in theosophy as in  Baruch Spinoza’s
philosophy and the mysticism of every religion.  In
this context, “god” is but the eternal universal law.
“A Day of Sunshine” is reproduced from “The Works
of Henry Wadsworth Longfellow”, The Wordsworth
Poetry Library, U.K., 1994, 886 pp., pp. 319-320.
(Carlos Cardoso Aveline)
00000000000000000000000000000000000000000000000000
O gift of God! O perfect day:
Whereon shall no man work, but play;
Whereon it is enough for me,
Not to be doing, but to be!
Through every fibre of my brain,
Through every nerve, through every vein,
I feel the electric thrill, the touch
Of life, that seems almost too much.
I hear the wind among the trees
Playing celestial symphonies;
I see the branches downward bent,
Like keys of some great instrument. [1]
And over me unrolls on high
The splendid scenery of the sky,
Where though a sapphire sea the sun
Sails like a golden galleon,
Towards yonder cloud-land in the West,
Towards yonder Islands of the Blest,
Whose steep sierra far uplifts
Its craggy summits white with drifts.
Blow, winds! and waft through all the rooms
The snow-flakes of the cherry-blooms!
Blow, winds! and bend within my reach
The fiery blossoms of the peach!
O Life and Love! O happy throng
Of thoughts, whose only speech is song!
O heart of man! canst thou not be
Blithe as the air is, and as free?
NOTE:
[1] Referring to the music of the wind upon reeds, H. P. Blavatsky wrote to a Russian newspaper:  “…There are many such natural orchestras in India; they are well known to the Brahmanas who call this wind in the reeds vina-devas (the lute of the Gods).”  See “From the Caves and Jungles of Hindustan”, H. P. Blavatsky, TPH, 1975-1983, p. 283. (CCA)
000
On the role of the esoteric movement in the ethical awakening of mankind during the 21st century, see the book “The Fire and Light of Theosophical Literature”, by Carlos Cardoso Aveline.