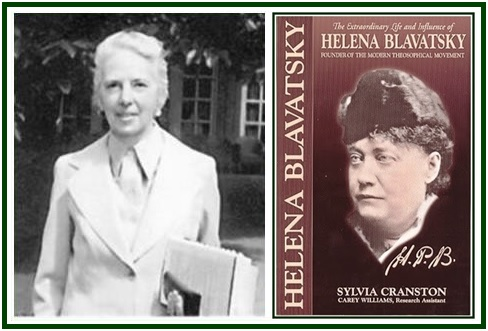 Anita Atkins, or Sylvia Cranston, and the front cover of her book on HPB
I first met Anita Atkins in New York, at the Centennial of the Theosophical Society on November 17, 1975. Boris de Zirkoff, a key speaker at the Convention, introduced Anita to me, along with Joseph Pope, co-author of her earlier books on Reincarnation.
Under the pen names Joseph Head and S.L. (later Sylvia) Cranston, they collaborated on several titles. We met in the lounge, where I was struck by Anita’s poised and quiet dignity. A New York U.L.T. member, she never pushed herself forward, but in her own non-partisan way encouraged all genuine Theosophical efforts.
Boris had shared numerous resources with Anita in his process of compiling and editing the “Blavatsky Collected Writings” series; she likewise shared her archival findings with him. In time, Anita was instrumental in opening up an archive of H.P.B.’s Letters which she had the Harvard University Andover Archivist send to me after Boris passing. She realized he would have wished it to become part of the Collected Letters series in the future.
As our correspondence grew over the years, Anita became very supportive of my efforts to compile a chronological sequence of William Quan Judge’s writings. She helped verify dates for introductory notes and even sent me several rare photographs of Judge, which appeared in the third volume of Echoes of the Orient (Point Loma Pubs. 1987).
In the Spring of 1978, she stayed with us while visiting California for an interview about her books on reincarnation with Tom Snyder of “The Tomorrow Show”. I remember her delight on a road trip through the wildflowers and Joshua trees in the high desert areas north of Los Angeles. She and her assistant, Caren Elin, also had several visits with Boris de Zirkoff, before he died on March 4th, 1981.
Originally Joy Mills and I had hoped Anita might cooperate in completing the still unedited H.P.B. Letters which Boris de Zirkoff had willed to the T.S. of America (Wheaton) along with the remainder of his unpublished H.P.B. manuscripts, and archives. However, failing health plus a commitment to focus on her H.P.B. biography, caused her to relinquish the project. Later Joy, Anita and I responded to John Cooper’s interest in taking on the work which he proceeded with until his unexpected death on May 12, 1998 at the University of Sydney.
Our closest contact with Anita was during the proofreading of “The Extraordinary Life and Influence of Helena Blavatsky, Founder of the Modern Theosophical Movement”, which came out in hardcover in 1993. Bob Atkins, Anita’s brother, and Caren Elin (her friend from New York U.L.T. days) began to assist in the arrangements, due to Anita’s failing health. Caren also saw into press a 2nd, as well as a more recent (1994) 3rd edition in paperback. “Reincarnation: the Phoenix Fire Mystery” came out in 1977 ( N.Y. Crown); published subsequently in paperback by Pasadena T.S. press (TUP) in 1994. With joint author, Carey Williams, Anita’s title “Reincarnation: a New Horizon in Science, Religion, and Society” came out in 1993 (Theosophical University Press, Pasadena, California).
About this time Bob Atkins formed Path Publishing Company to help keep Anita’s titles in print. Bob Atkins also funded full-sized advertisements in the New York Times on H.P.B. and Anita’s works. Anita had developed Parkinson’s disease, although maintaining her clear thinking for a number of years. During these busy years of re-issues, Caren arranged to have Anita transferred to a very lovely nursing home in Santa Barbara, where she could help see to her proper care. During those last years we saw Anita there several times before her passing on June 20, 2000. She always seemed amiable and cheerful despite being in a wheelchair. Caren says she died peacefully, without much pain. A worthy soul to whom the world is indebted for the first full-scale, well-researched biography of Helena Petrovna Blavatsky.
000
The above article was first published at the Canadian magazine FOHAT, volume IV, Fall 2000, page 65.
000
On the role of the esoteric movement in the ethical awakening of mankind during the 21st century, see the book “The Fire and Light of Theosophical Literature”, by Carlos Cardoso Aveline.