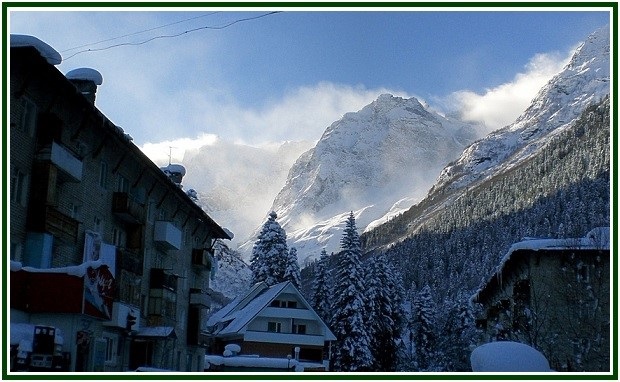 The Mountains in Dombay, Russia
When I see snow-covered mountains rising up in the distance toward the clouds, my heart trembles with unexpected joy. Ancient and silenced memories awaken within me, as if I had already contemplated these images at some time past, and thus have always longed for them, as if the most wonderful and sacred promises were being fulfilled.
I stand awed and overwhelmed, and do not know if I should believe this sight, so light, so bold is this sweep to the skies. How gentle, how illusory are the outlines. And how powerful are the masses of earth hidden within them. I see the earth rising up toward the heavens, I see the heavens embracing it, I see how the earth becomes lost in the heavens as they merge together – can it be that the earth itself becomes part of the heavens? Is this not a dream? Or is perhaps this vision a true reality, while the flat existence of every day is merely a weighty dream?
Where did this blessed trepidation come from, this feeling of approaching my native land? It is as if this splendor shining down from afar, this promised future, has emerged from my intimate past, from my existence before the creation of time …. Is my soul perhaps so “ancient of days” that I truly was present at the forming of the worlds? Or do these distant mountains perhaps recount to me what I was, what I am, what I will be – what splendor awaits me in the future?
Gentle visions, prophetic images, divine dreams …. But now the sight has vanished. The airy specters have been veiled by earthly mist and heavenly clouds. Only the heart whispers to me of the possible existence of the impossible.
Later, the mountains allow me to come among them: they draw me up, calmly and serenely letting me tread upon them and scale their steep peaks. Their calmness is passed on to me, and I climb ever higher. My ascent is slow; I must not and should not hurry, for much time is needed to overcome the high altitude, to become accustomed to it so that my head stops spinning from this sleepy mountain rebellion, so that my breathing does not stop from this prayer of nature…
I am already tired, but I do not want to and cannot think about my fatigue. A mysterious power calls me to the top. I am suddenly bent on going higher, higher, ever higher, as if a mighty and precipitate heave upward has taken hold of me and I am powerless to resist. Only after having exhausted all my efforts would it be possible to stop climbing and break away, but even then I would feel in my soul that I had fallen disgracefully short in a great deed. No, that would be impossible; I must keep going to the end, in order to experience the meaning and destiny of that ancient uprising for myself, to learn the restless prayer of the mountains…
000
Published in the associated websites on 24 March 2020. Reproduced from the book “The Singing Heart”, by Ivan Ilyin (or Ivan A. Il’in), Orthodox Christian Translation Society, OCTS, USA, 2016, 190 pp., see pp. 108-109.  The three initial paragraphs are also published at the May 2017 edition of “The Aquarian Theosophist”, page 09.
000