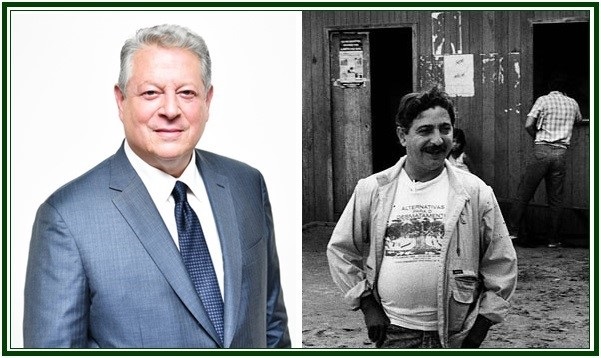 Al Gore (left) and Chico Mendes (1944-1988)
0000000000000000000000000000000000000000000000
The following text is reproduced from the book
“Earth in the Balance”, ecology and the human spirit,
by Senator Al Gore, published in 1993 in New York by
Plume-Penguin, and with 408 pages. See pp. 285-287.
00000000000000000000000000000000000000000000000000
The weak and powerless are the early victims, but the relentless and insatiable drive to exploit and plunder the earth will soon awaken the conscience of others who are only now beginning to interpret the alarms and muffled cries for help. In the famous words of Pastor Martin Niemoller, about how the Nazis were able to take over an entire society:
“In Germany the Nazis came first for the Communists, and I didn’t speak up because I wasn’t a Communist. Then they came for the Jews, and I didn’t speak up because I wasn’t a Jew. Then they came for the trade unionists, and I didn’t speak up because I wasn’t a trade unionist. Then they came for the Catholics, and I didn’t speak up because I was a Protestant. Then they came for me, and by that time there was no one left to speak for me.”
One who did speak up for the new resistance was Chico Mendes. In late 1988, Senators Tim Wirth, John Heinz, and I, along with Congressmen John Bryant and Gerry Sikorski and a delegation of observers, were on our way to Brazil to meet with Mendes, perhaps the best known of these resistance fighters in recent years, when he was assassinated by a group of wealthy landowners.
A native of the Acre province in the Amazon, Mendes organized and led the seringueiros (rubber tappers), who harvest the renewable bounty of the rain forest – fruits, nuts, and especially rubber – which they make from sap collected by tapping the rubber trees. Their way of life has helped preserve the rain forest, but they now stand in the way of commercial interests that seek to exploit the forest by bulldozing or burning it down to make way for temporary cattle ranches. On numerous occasions, Mendes and his band of rubber tappers attempted to block the bulldozers and refused to allow the exploiters to cross the rain forest to set fire to nearby plots.
Going further, Mendes organized alternative – and sustainable – ways to live profitably in the rain forest and promoted a host of imaginative enterprises to encourage the farmers not to destroy their land but live in Harmony with it. As his recognition of the complexity of the issues grew and his innate leadership skills developed, he entered politics, but the wealth and power of the landowners ensured his defeat. When he continued to challenge their interests, they murdered him, three days before Christmas, with a shotgun blast as he stood in the doorway of his home.
When we arrived in Acre, we met with Mendes’s widow, Ilzamar, and with his colleagues in the seringueiro movement who have vowed to continue to resist the destruction of the Amazon. Their battle is far from over: many others in the movement less visible than Mendes have also been killed, and the rain forest cannot be saved without organized support from the rest of the world. But Mende’s violent death was not wasted, for it dramatically focused global attention on the severe threats to one of the most remarkable ecosystems in the world. Though he wanted to live, this is precisely what Mendes prophesied in his final interview:
“If an angel came down from the sky and could guarantee that my death could strengthen this fight, it would be a fair exchange.”
000
The above article was published in the associated websites on 22 August 2019.
000
Click to read other texts by Al Gore.
See our section “Planetary Change and the Civilization of the Future”.
Examine the article “Al Gore, Theosophy and the Cycle”, by Carlos Cardoso Aveline.
000
E-Theosophy e-group offers a regular study of the classic, intercultural theosophy taught by Helena P. Blavatsky (photo).