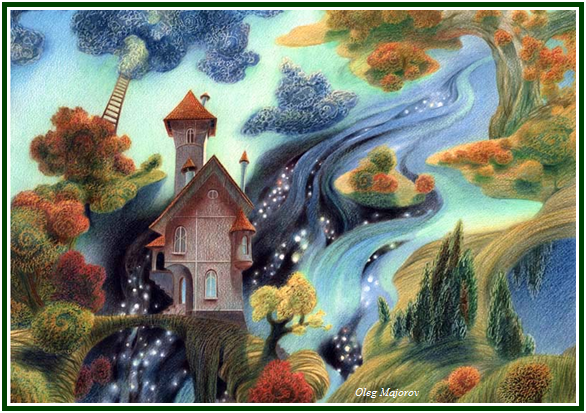 “The ever unknowable and incognizable Karana alone,
the Causeless Cause of all causes, should have its shrine
and altar on the holy and ever untrodden ground of our
hearts, invisible, intangible, unmentioned, save through
‘the still small voice’ of our spiritual consciousness.”
Helena P. Blavatsky [1]
Human beings naturally search for that which is unlimited. This is but a tendency, however. It points to a potentiality yet to be developed.
For all practical purposes, each human life is a loan made by nature. We borrow a physical corporeality from her, a physicalness, a materiality, and at the end of each incarnation we return to Nature that specific tendency to be bodily.
It is correct to say “corporeality” instead of “body” because what we have access to, is a process of constant “bodily transformation” and not a body seen as a stable instrument. The “body” of a person who is ninety years old is rather different, for instance, from “his own body” when he was nine months old, or nine years, or 49 years.
Physical life is never a certainty: hence the image of a loan in which the owner, Nature, is entitled to determine the returning of the borrowed materiality  at any time and with no previous notice.
From a mosquito and an herb to a man, potential danger surrounds each Form of Life from the very moment of birth. Even before the Form is born there may be dangerous moments, especially for mammals, and Ernest Pelletier wrote:
“Man’s destiny hangs by a thread at the best of times”. [2]
Along their precariously temporary corporeality, some unfortunate individuals run away from the great questions of life and death, in order to take an imaginary refuge in superficialities. They try to convince themselves that the clock of karmic time will not be ticking, as long as they do not think of it.
Some courage may be necessary to look with realism at physical life and to accept its passing character. Yet it is exactly this sort of self-honesty that paves the way for one’s connection to that life which is unlimited.
The process deserves examination.
It must be said that the initial gate which is crossed by one who dies, who goes into sleep, or attains illumination during waking life, is one and the same threshold.
In the Mahatma Letters one can see therefore this enlightening sentence:
“…He who holds the keys to the secrets of Death is possessed of the keys of Life”. [3]
Along the path of self-knowledge, it is the average, inner focus of individual consciousness which gradually emerges above and beyond the triadic gate to the possibilities of death, sleep and wakefulness.
Another triad of states is wakefulness, dreamless sleep and dreaming.
An Eastern Sage wrote that the “three bodies, existing in the waking, dreaming, sleeping states, are all known, witnessed, and watched, by the spirit which standeth behind and apart from them, in the unwinking vigilance of ecstasy, or spirit-waking.” [4]
And William Wordsworth, the poet, expressed the same mystery as he wrote in his Ode:
“Our birth is but a sleep and a forgetting;
The Soul that rises with us, our life’s Star,
Hath had elsewhere its setting,
And cometh from afar”. [5]
The path to a correct understanding of these several levels of consciousness is taught by the classical esoteric philosophy, whose lessons are not all pleasant. One practical challenge placed before students is to organize their daily and lifelong agendas so as to establish clear priorities on the basis of a few fundamental facts:
1) physical life is a passing process;
2) it is a means and not an end in itself;
3) it is an opportunity to be used with care, for a meaningful purpose; self-liberation, in solidarity with the liberation of all beings.
One major and unnecessary source of suffering consists in looking at passing things as if they were lasting; and in looking at lasting realities as if they were transitory or could be selfishly manipulated for short term purposes.
Life is symmetrical and, on the other hand, one true source of inner peace consists in looking at transitory events as passing winds, and in knowing that ultimately this includes one’s own lower self.  Peace also comes from accepting that permanent realities are long-standing, and from knowing that this includes the Voice of the Silence, that wordless, permanent, peaceful reading of Life, present in the heart of every individual consciousness.[6]
That monadic and Atmic center is one’s enduring dwelling-place.  At any given moment, one’s real, nameless, impersonal self is there, for it never really leaves the Source; and it depends on each one to take measures to increase contact with it, thus attaining an unbroken view of life.
NOTES:
[1] “The Secret Doctrine”, H. P. Blavatsky, Theosophy Co., Los Angeles, 1982, Volume I, p. 280.
[2] “The Judge Case”, Ernest Pelletier, a book published by the Edmonton Theosophical Society, Canada, 2004. See the opening paragraph in the Introduction, page XI.
[3] “The Mahatma Letters”, Theosophical University Press, Pasadena, 1992, 494 pp., see Letter LXV, p. 365, upper half.
[4] “The Dream of Ravan – A Mystery”, Theosophy Co., India, 248 pp., 1974, pp. 211-212. There is a detailed examination of these various states of consciousness along pp. 210-219 of “The Dream of Ravan”.
[5] “Selected Poems”, William Wordsworth, Gramercy Books – Random House, New York-Avenel, USA, 1993, 256 pp., see “Ode – Intimations of Immortality”, part V, at p. 135. H.P. Blavatsky quotes the same verses in the Section VIII of her book “The Key to Theosophy”.
[6] As to the human heart being a potential vehicle of universal consciousness, see “The Secret Doctrine”, vol. II, p. 92, upper half.
000
E-Theosophy e-group offers a regular study of the classic, intercultural theosophy taught by Helena P. Blavatsky (photo).