The Sacred Word Which is
Connected to the Essence of the Universe
William Q. Judge 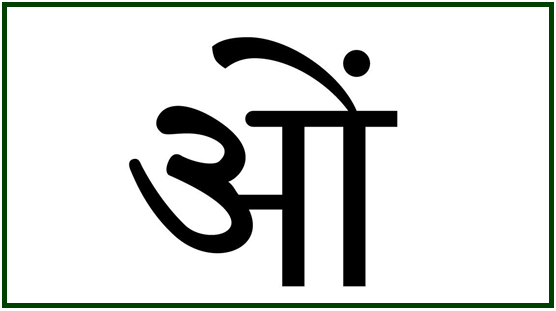 Aum, in Sanskrit
The most sacred mystic syllable of the Vedas is Aum. It is the first letter of the Sanskrit alphabet, and by some it is thought to be the sound made by a new born child when the breath is first drawn into the lungs. The daily prayers of the Hindu Brahmin are begun and ended with it, and the ancient sacred books say that with that syllable the gods themselves address the most Holy One.
In the Chandogya Upanishad [1] its praises are sung in these words:
“Let a man meditate on the syllable OM, called the udgitha, [2] ……. it is the best of all essences, the highest, deserving the highest place, the eighth.”
It is then commanded to meditate on this syllable as the breath, of two kinds, in the body – the vital breath and the mere breath in the mouth or lungs, for by this meditation come knowledge and proper performance of sacrifice. In verse 10 is found:
“Now, therefore, it would seem to follow that both he who knows the true meaning of OM, and he who does not, perform the same sacrifice. But this is not so, for knowledge and ignorance are different. The sacrifice which a man performs with knowledge, faith, and the Upanishad is more powerful.”
Outwardly the same sacrifice is performed by both, but that performed by him who has knowledge and has meditated on the secret meaning of OM partakes of the qualities inhering in OM, which need just that knowledge and faith as the medium through which they may become visible and active. If a jeweler and a mere ploughman sell a precious stone, the knowledge of the former bears better fruit than the ignorance of the latter.
Shankaracharya in his Sharir Bhashya dwells largely on OM, and in the Vayu Purana a whole chapter is devoted to it. Now as Vayu is air, we can see in what direction the minds of those who were concerned with that purana were tending. They were analyzing sound, which will lead to discoveries of interest regarding the human spiritual and physical constitution. In sound is tone, and tone is one of the most important and deep reaching of all natural things. By tone, the natural man and the child express the feelings, just as animals in their tones make known their nature. The tone of the voice of the tiger is quite different from that of the dove, as different as their natures are from each other, and if the sights, sounds, and objects in the natural world mean anything, or point the way to any laws underlying these differences, then there is nothing puerile in considering the meaning of tone.
The Padma Purana says:
“The syllable OM is the leader of all prayers; let it therefore be employed in the beginning of all prayers”, and Manu in his laws ordains:
“A Brahmin, at the beginning and end of a lesson on the Vedas, must always pronounce the syllable OM, for unless OM precedes, his learning will slip away from him, and unless it follows, nothing will be long retained.”
The celebrated Hindoo Raja, Ramohun Roy, in a treatise on this letter says:
“OM, when considered as one letter, uttered by the help of one articulation, is the symbol of the supreme Spirit. ‘One letter (OM) is the emblem of the Most High, Manu II, 83.’ But when considered as a triliteral word consisting of