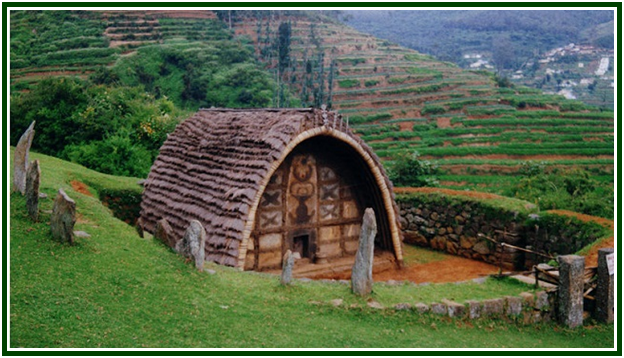 A traditional house in the Nilgiri Hills, South India.
Reading is an act of freedom which transcends barriers of space and time. The only obstacle we may face while reading a good book is our own inability to fly with the words and the spirit animating them. We overcome the difficulty once the process of reading with the soul becomes a habit.
On the pages of a book one can travel to places physically inaccessible and get to know about people of different traditions. It makes no difference how far distant they are in time or space. A good book is like a bridge. It leads one’s consciousness to other aspects of reality. One such work is “The People of the Blue Mountains”, in whose pages H.P. Blavatsky writes about the Nilgiri Hills, in Southern India, and the unknown tribes which lived there.
That mountainous region was seen by the Indians as a magic territory and a dwelling place of the gods. No mortal would dare tread on its soil. There were many stories, legends and superstitions around those blue mountains; nobody had the courage to explore them. Up to 19th century the mountains and their inhabitants were inaccessible to India not because of any geographical or physical difficulty, but due to the feelings of respect, fear and devotion.
The Nilgiri Hills had their beauty and magic revealed to the world after the curiosity of two British citizens, Kindersley and Whish, made them organize an expedition. The book “The People of the Blue Mountains” describes their adventure on the basis of the reports published at the time, which HPB collected. The volume includes the narrative of her own visit to the hills, in 1883. Readers of the book can have the feeling that they themselves are breathing, in 19th century, the pure atmosphere of that region and seeing with their own eyes the beauty and the mystery of Nilgiri.
H.P. Blavatsky said that “apparently the ‘Blue Mountains’ were a region selected by Nature for her world-wide varieties of vegetation”.[1] The audacity of the “Westerners” made it possible to discover a natural world that nobody had imagined could exist in Indian soil.  And our civilization also came to know of the existence of two tribes whose origin even today is a mystery to researchers: the Kouroumbs (dwarfs) and the Todds (giants).
The word ‘Todd’ is also spelled ‘Toda’.
By having some information about these two tribes we expand our knowledge of mankind’s history.  The Kouroumbs were seen as a savage people, as excellent hunters and practitioners of sorcery. Only the Todds were respected by them. The Todds had no god and used no weapons. While living in a region with many wild tigers and elephants, the Todds were never attacked by them.  In their language there was no direct word for lie or falsehood. They were vegetarians and their life concentrated around their sacred buffalos.
An important aspect of the book is in the fact that through History, testimony, research and reflection about the discoveries, Helena Blavatsky makes in it a manifesto against Western materialism.  The Kouroumbs and the Todds represent two aspects of human nature: darkness and light, evil and goodness. The Kouroumbs hate, the Todds love. The Kouroumbs produce sickness in those who hate, and the Todds heal the sick through love. The wisdom of the Todds says:
“The fire of the sun is composed of the fires of love. (…) Each good man, white or black, is a Todd. Wicked men do not love; that is why they cannot go up into the sun.” [2]
The Sun is a symbol of the higher self or spiritual soul. Helena Blavatsky writes:
“I know of no example of a Todd having consented to care for some one and not having cured him. But it is only rarely that he consents. He will never touch a drunkard or a debauched person. ‘We heal through the love flowing from the sun, and this love will have no effect upon a wicked man’, the Todds claim.” [3]
Humans must preserve the goodness which makes the healing possible.
The good is the great power and constitutes the law. The “evil” is but the good which did not happen yet, the place where a healing must occur in due time, once conditions are favourable.
NOTES:
[1] “The People of the Blue Mountains”, Helena P. Blavatsky, Theosophical Press, Wheaton, Illinois, USA, 227 pages, online edition “The Aquarian Theosophist”, 2018. The book is available in our associated websites: see p. 53.
[2] “The People of the Blue Mountains”, H.P.B., p. 184. See the link on note [1] above.
[3] “The People of the Blue Mountains”, H.P.B., p. 187. See more on the Todds in the 1877 book “Isis Unveiled”, Helena Blavatsky, original edition, volume II, pp.  613-615. “Isis Unveiled” is available at our associated websites.
000
See the book “The People of the Blue Mountains”, by Helena P. Blavatsky.
000
The above article is a translation by CCA of Joana’s article “Blavatsky e as Montanhas Azuis”, which is published in our associated websites.
000
On 14 September 2016, after examining the state of the esoteric movement worldwide, a group of students decided to found the Independent Lodge of Theosophists. Two of the priorities adopted by the ILT are learning from the past and building a better future.
000
E-Theosophy e-group offers a regular study of the classic, intercultural theosophy taught by Helena P. Blavatsky (photo).