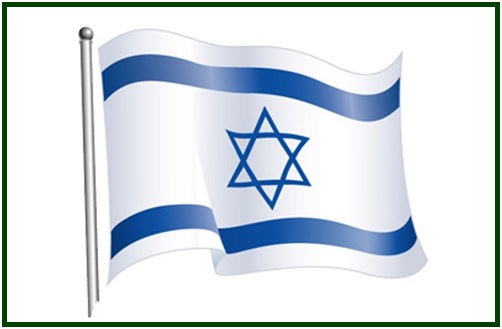 The flag of Israel contains a sacred symbol that is central in both Judaism and Theosophy
0000000000000000000000000000000000000000000000
Editorial Note:
The topic of Nazism and Anti-Semitism is momentous
and will remain so until humanity moves entirely away from
such a level of spiritual ignorance. Every philosophical movement
should have something to say about this watershed issue.
An author who believed the Theosophical Movement has
something in common with Nazism read the article “Theosophy
and the Second World War”, which is published at our
associated websites.[1] He sent a message to us on June 13, 2010,
insisting that H.P. Blavatsky’s writings “had an influence” on
Nazism. The following text is our answer to him.
00000000000000000000000000000000000000000000000000000000000
Dear Sir,
Thanks. I will try to give you some hints, rather briefly:
1) You fail to see that the first and most important object of the theosophical movement is anti-Nazi. It establishes that all men and women of whatever race or caste, ideology or nation,   are equal in rights and in brotherhood. This, main object of the movement is “To form a nucleus of a Universal Brotherhood of Humanity, without distinction of race, creed, sex, caste or color”.
2)  You say H. P. Blavatsky criticized the Jewish religion. You fail to see that she criticized other religions much more harshly than she did Judaism. Think of what she wrote about Christianity, for instance, and you will see that she was rather friendly towards Jewish traditions.
3) You fail to see that various Jews were present in the first, founding meetings of the Theosophical Movement in New York, and that the study of Qabalah was one of its main initial goals. One of them was a Rabbi. That was not a coincidence.
4) You fail to see how often and largely H.P.B. quoted from the Jewish tradition and Qabalah throughout her books and writings. She did this to the very end of her life.
5) You fail to see that absolutely no race is considered “superior” in Theosophy (and such an idea would be absurd indeed). Root-races are but outer instruments for evolution. The same Souls that live today in one root-race or sub-race have lived before in previous root-races and sub-races, and they will live in the future ones.
6) You fail to see that Theosophy, just like Esoteric Buddhism, Jainism or the New Testament teachings, is a non-violent philosophy.
7) You fail to see that Helena Blavatsky did not engage in any anti-British Movement or pro-Indian Independence Movement, and that even the Theosophical Society (Adyar) was pro-British during the Second World War, not to mention all the other branches of the Movement.
8) You fail to see the numerous inner and outer links between the Theosophical Movement and the United States of America, the United Nations, and the Allied countries.
9) You fail to see that H.P.B.’s Theosophy is completely against any conception of an “unfailing leader”, a concept which belongs to the Vatican, to Nazis, and to Fascists.
10)  You seem to ignore the Close Links between the Nazis and the Vatican, as my article “Theosophy and the Second World War” shows; and that the Vatican, the Nazis and the Fascists are totally inimical to H.P.B.’s authentic Theosophy, as they are against Democracy.
11) Please take notice of the Jewish-Hindu symbol (two interlaced triangles) in the middle of the symbol of the theosophical movement. This also was not a coincidence. Today this is the main symbol in the flag of the State of Israel. Please draw your conclusions.  Read about this symbol in HPB’s writings and in the Mahatma Letters.
12) You mention the svastika symbol of theosophical movement (which was founded in 1875). The svastika is Hindu. It is a most ancient symbol for the Kosmic evolution, and it is not a Nazi symbol, therefore. The Nazis misused it for their own anti-evolutionary purposes, and this is their karma. Nazism is a disease of the moment, whereas Kosmic Evolution is eternal.
13) You say the Nazis were “influenced” by Theosophy. Were they?  If someone makes a fake copy of a work of art, will you blame the artist, or the forger?  The Nazis did not even copy theosophy. They only got from it – and distorted – a couple of concepts. They did this while propagating and acting upon ideas diametrically opposed to those of theosophy and the universal brotherhood.
14) Shadow is condemned to imitate light and to run after it. This is no reason for anyone to make a confusion between the two, for they are quite different.  If Nazism distorts elements taken from the ancient Wisdom and tries to use them for selfish and violent purposes, one should fight Nazism, not the Wisdom.
I invite you to read other articles in our associated websites, including the one entitled “Blavatsky, United Nations and Democracy”.
I hope you study real theosophy, in order to understand these matters better.
Best regards, Carlos.
000