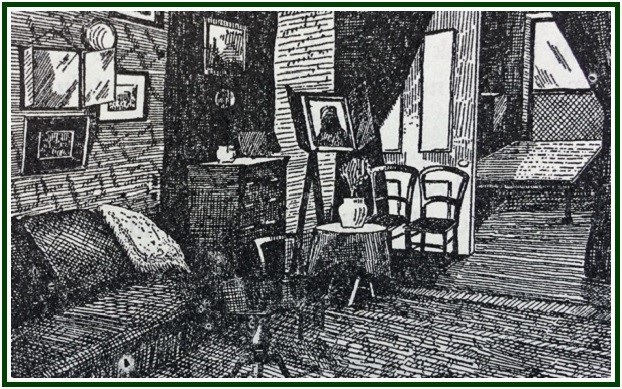 Helena Blavatsky’s office in London, 1887-1888.
Partial view of a drawing by William Quan Judge.
As the main authors of pseudo-theosophical books lose readers and are gradually forgotten worldwide, the feeling slowly spreads among members of the Adyar Theosophical Society that “one must study Helena Blavatsky”.
Do Blavatsky students have a future in the Adyar movement?
Merely verbal study of Blavatsky (and the Mahatma Letters) within the Adyar TS promotes a superficial embellishment, and projects an idea of legitimacy over that which is  illegitimate, as if it were enough to read the words of a wise author to change one’s objective reality. It takes a lot more than that. It is necessary to draw practical lessons from the teachings of the wise.
The Adyar approach to theosophy has always tolerated those who study Blavatsky, but it has also rejected and continues to reject effective action based on Blavatsky’s teachings. This separation between what is thought and what is done is one of the gravest pitfalls created by the Besantian “clairvoyants”, and which students of real theosophy must face.
If something is to be improved in the movement controlled by Adyar, it is necessary for its members and leaders to regain a historical consciousness and learn from the mistakes made since 1891. Words and actions must be connected again.
The present power structure itself must be abandoned, since it is based on old pseudo-masonic illusions and false esotericism. Its foundations include the worship of portraits representing imaginary masters and an attitude regarding the teaching according to which “reciting its words” is enough.
H.P. Blavatsky herself wrote in “Why I Do Not Return to India”:
“..… Nor can I, if I would be true to my life-pledge and vows, now live at the Headquarters [of the Theosophical Society in Adyar] from which the Masters and Their spirit are virtually banished. The presence of Their portraits will not help; They are a dead letter.”[1]
And things got worse since she wrote these words.
Starting in the beginning of 20th century, the worn-out argument of “liberty of thought” has been used as a political excuse to keep senseless forms of ritualism in the center of the power-structure, and as a reason to deny the necessary relation between knowledge and action.
Besantian consensus consists in immediately labelling as “intolerant” and “unbrotherly” any idea of eliminating those forms of blind belief that belong to the 1900-1934 period of false clairvoyance.[2]
From such a perspective, the works of Helena Blavatsky are seen as perfectly acceptable for memorizing and repeating in words. It is also useful as a marketing tool as it provides an air of classicism and legitimacy. Anyone adopting the true teachings as a guide for action, however, is automatically deemed “a dangerous radical”.
“Each one thinks whatever he likes”, says the politically correct mantra. And a commitment to accept the facts, to search for truth, to actively research and to reject obvious falsities is silently forbidden, although this is done with the appearance of a brotherly attitude, and in the sacred name of mutual friendship.
No one takes responsibility for the veracity of the “teachings”. They must not be taken too seriously. Acting upon them is seen as unbrotherly, and Ethics has no central place in such a “theosophy”.
In the realm of mental superficiality, reading Blavatsky is a matter of curiosity and must be restricted to the level of words.
If the Besantian frauds are abandoned, however, a blissful long-term change may take place.
Until this occurs, the next springtime and the rebirth of real vitality will have to be prepared in independent circles and in associations that are free from bureaucratic or institutional interests. The associated websites interpret the growing number of their readers among members of the Adyar Society as a true sign of the times. The first half of the present century seems to be a correct occasion to get rid of nonsense and build a more legitimate theosophical movement.
NOTES:
[1] From the article “Why I Do Not Return to India”, by Helena Blavatsky.
[2] About frauds and illusions, see for instance “Besant Announces She Is An Adept”, “Krishnamurti on Besantian Delusions”, “Leadbeater and the Daily Life on Mars”, “Racism in the Name of Theosophy”, “The Fraud in Adyar Esoteric School” and “The Making of an Avatar”.
000
The above article was published on the associated websites on 02 July 2020.
000
Click to read the article “Paracelsus and the Book of Nature”, by CCA, and the short story “The Rose of Paracelsus”, by Jorge Luis Borges.
000