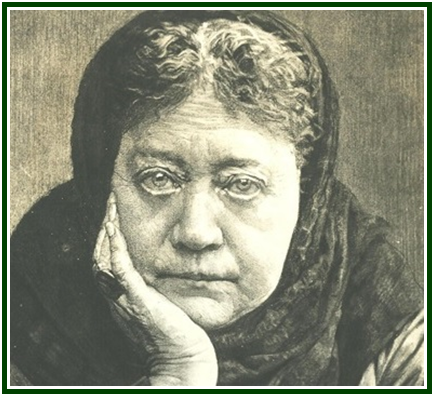 Helena P. Blavatsky’s portrait, if she had lived to be seventy
years old; part of a painting by Dutch artist  J. D. Ross (1875-1952)
There is still a pseudo-theosophy which, since it was created by Annie Besant in the beginning of the 20th century, has been inspiring a rather authoritarian, ritualistic version of the theosophical movement.
It is probably for this reason that it is not always easy for the general public to clearly see what is the relationship between the true theosophical movement and democracy. Many do not know what does theosophy have to say about Nazism, Fascism and other forms of authoritarian action.
In order to obtain a clear view of the matter, perhaps one should  remember some facts of history. They give us hints about the mysteriously dynamic link between H.P. Blavatsky’s work in the 19th century and human situation in the first part of 21st century. There are interesting “coincidences” and  some numerological signs which can be organized in five items.
1) Helena Blavatsky worked to build the conceptual foundation of a universal brotherhood of mankind which is inseparable from the feeling of respect for each people, each culture, and every individual. At the occult level, it is no coincidence that the end of the World War II in Europe and the victory of democratic countries against Nazism are celebrated precisely in the same day and month when the founder of the theosophical movement closed her incarnation. H.P. Blavatsky, who lived for Universal Brotherhood,  died  8th of May, 1891. The War ended  8th of May, 1945.
2) Harry Truman,  the president of the USA  who led the final moments in the Second World War,  was born precisely  in  May 8th, 1884.  He was the 33rd president.
3) The Theosophical Movement was  founded in 1875 in the city of  New York. The United Nations Organization was created in 1945,  exactly seven decades or seventy years later.  The  U.N. Headquarters is   established precisely  in New York, that is, the same city where the movement was founded.
4) The United Nations  Chart starts with a vigorous proclamation of the first objet of the theosophical movement – Universal Brotherhood.  Far from perfection as it is,  the theosophical movement is an inner seedling  of universal brotherhood just  as the U.N. is its outer seedling.  It’s no use accusing  seedlings  of not being  adult trees.
5) The creation of the thesophical movement in 1875 served indeed as an occult  model or archetype for the U.N. But the conception of the movement was not an entirely new process.  The USA, as a motherland, was a deep source of inspiration for  the structure of the theosophical movement. H.P.B. wrote:
“Born in the United States, the Society was constituted in the model of its Motherland. The latter, omitting from its Constitution the name of God lest it should afford a pretext one day to  make a  state religion, gives absolute equality to all  religions in its laws. All support and each is in turn protected by  the State.  The Society, modelled upon this Constitution, may fairly be termed ‘A Republic of Conscience’.” [1]
So if now and then the public policies of the U.S. government reflect negative aspects of present human  karma and  seem to be wrong and unfair in many an aspect,  it may be wise to give it a few more centuries, perhaps  a  few thousands of years,  before we get too frustrated.
Meanwhile, we can take care of our own, and somewhat still  precarious “Republic of Conscience”, that is, the theosophical movement, the inner seedling of universal brotherhood.
Are we doing our homework in  the best way we can?  Are we a healthy collective  source of inspiration for the rest of human process? Are we free from “kings”, “popes”, “bishops” – and “candidates to these roles” in the movement as a whole?
There is probably no occult separation between different theosophical groups, in this “republic of conscience”; and this absence of  inner separation creates a common responsibility for each one and for all of us.
That responsibility may  include  a significant part  of  the fate of mankind in the decades and centuries ahead.
NOTE:
[1] “Theosophical Articles”, H.P. Blavatsky, “Theosophy Company”, Los Angeles, 511 pp., 1981, volume I, p. 53. Also published at  the “Collected Writings”, Helena P. Blavatsky, TPH, India/USA/UK, Volume II, page 104. The text from which comes this paragraph  is entitled “What Are the Theosophists?”.
000
On the role of the esoteric movement in the ethical awakening of mankind during the 21st century, see the book “The Fire and Light of Theosophical Literature”, by Carlos Cardoso Aveline.