Before Saying “Thanks” to Helena
Blavatsky, One Must Understand Her Mission
Carlos Cardoso Aveline 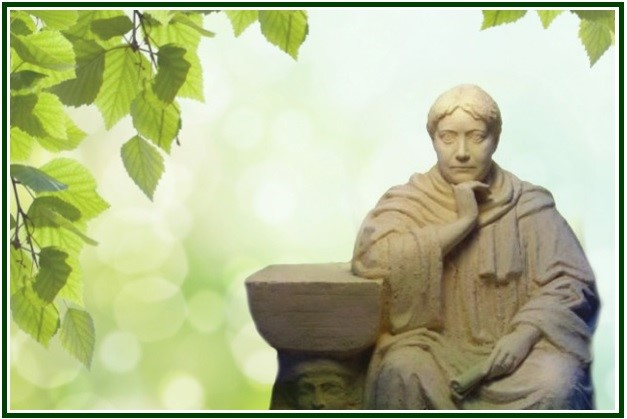 Partial view of a statue of Helena Petrovna
Blavatsky, made by Ukrainian artist Alexey Leonov
Disloyal politicians often pay ceremonial homage to the very ideals they betray.
Soon after the death of Helena P. Blavatsky on the 8th of May 1891, Henry S. Olcott was getting ready to start his struggle for power against those who were loyal to her, when he created the “White Lotus Day”, which should be celebrated every 8 of May as a homage to the founder of the modern esoteric movement.[1]
Olcott was deluded.
Although fundamentally honest, he had poor ethical discernment. He should know the “homage” which Helena Blavatsky expected was no personal adulation. Such a practice would be contrary to the vows she made and her choice for self-forgetfulness and impersonal dedication to Truth.
Blavatsky wanted people to have ethics and loyalty towards the Teachings of the Mahatmas, instead. And that was something Olcott and his political partner Annie Besant did not have: their main goal was largely to obtain institutional power.
There is one aspect, however, in which the name “White Lotus Day”  is ironically right for the date chosen by the Adyar Theosophical Society to “pay tribute” to HPB.  The name given by H. S. Olcott coincides with the title of a classic book by Mabel Collins, “The Idyll of the White Lotus”. The volume narrates the sad story of high treason in an esoteric organization.[2]
The lust for power will sometimes hide behind a homage.
In spite of short term appearances, however, every form of disloyalty is self-defeating. In due time, ethics and love for truth win the day. The theosophical movement has started already to free itself like a Phoenix, gradually raising from the ashes of pseudo-esoteric illusion.  This is possible because HPB’s mission, acting on the higher planes of consciousness, constituted in the 19th century a turning point in the life of present civilization. Thanks to it the course of human events was decisively changed in the 20th and 21st centuries.
The Importance of the Eighth of May
The Second World War is a watershed in the Karma of our mankind, and its end with the victory of Democracy is numerologically related to the theosophical effort. [3]
The seventy years’ cycle is important in advanced theosophy because it combines the number Seven with the Pythagorean Decad.
Precisely seven decades after the foundation of the theosophical movement in 1875, on the eighth of May 1945 peace on Europe was established with the victory of the Allies and Democracy against Nazi-Fascism. The mission of H. P. Blavatsky, in sowing the seeds of universal brotherhood, had as one of its goals to reduce the effects of 20th century wars and prevent humanity’s fall under the complete dominion of organized unspiritual ignorance.
On the eighth of May 1891 HPB concluded her mission. On the eighth of May 1945, an important victory of mankind against obscurantism was officialized. In the same year the United Nations Organization was created, whose goal is the harmony among nations.
How to Celebrate HPB’s Mission
The right way to express admiration for Helena Blavatsky’s mission remains the same. It has never changed.
It consists in understanding and supporting, in the first place, the original proposal of the theosophical effort, which aims at helping mankind to free itself from ritualism, war and superstition. In order for this to occur one must leave aside both individually and collectively the fear of being sincere, and start paving the way to the future civilization, whose conscious basis is the law of universal brotherhood.
The eighth of May is the right time to renew our decisions to try our best at every moment in life.
It is an occasion to be sincerely thankful to the Masters of the Wisdom and their closest disciples. We can then silently say thanks to all beings, especially those who are more advanced than us – and reaffirm our vows to lead ethical lives.
Along each month of May, and on its Full Moon, it is easier for human beings to expand the contact with the wordless voice of their higher selves, whose substance is universal.
NOTES:
[1] On what happened in political terms immediately after HPB died in May 1891, see the well-documented article “The Wills of Helena P. Blavatsky”, by Ernest Pelletier. The text is available in our websites.
[2] “The Idyll of the White Lotus”, by Mabel Collins. Subtitle: “A Mystical Novel”. Published by Quest Books, TPH in the USA, 1974, 142 pp. Although the book contains some points of theosophical teaching, it dwells too much on treason and negative thinking; in a way it anticipates the trajectory of Mabel Collins, who betrayed ethical precepts and abandoned the theosophical movement soon after it was published. Mr. T. Subba Row, who made a vehement defense of “The Idyll”, also had not a loyal or happy ending in his short career as a theosophist. As to how Mabel Collins abandoned ethics and the theosophical movement, see Letters 45-A and 45-B  in “Letters From the Masters of the Wisdom”, edited by C. Jinarajadasa, First Series, TPH, India, 183 pp., 1973, pp. 96-98. In the Letter 45-A, a Master warns HPB that M.C. has chosen falsity.
[3] See in our associated websites the articles “Theosophy and the Second World War”, “Blavatsky, United Nations and Democracy”,  and “The Theosophical Movement, 1875-2075”, all by C. C. Aveline.
000
An initial version of the above article was published in the May 2015 edition of “The Aquarian Theosophist”. Its title was “Reexamining The White Lotus Day”, and it had no indication as to the name of the author.
000
See also the article “The Full Moon of May”, which is available in our associated websites.
000
In September 2016, after a careful analysis of the state of the esoteric movement worldwide, a group of students decided to form the Independent Lodge of Theosophists, whose priorities include the building of a better future in the different dimensions of life.
000