The Classical 1940 Essay by Berdyaev,
With Commentaries by Alan A. Spears
Nicolas Berdyaev 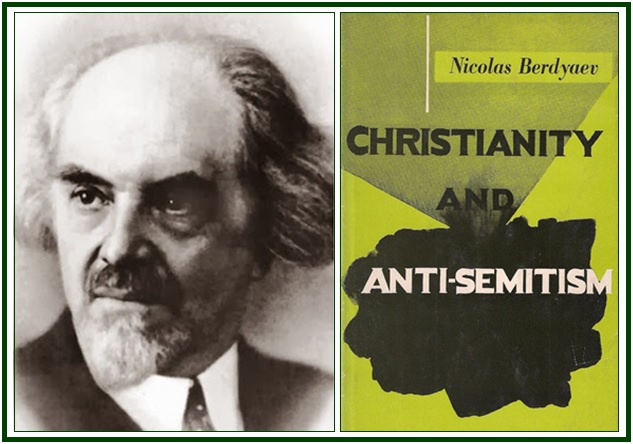 Nicolas Berdyaev (1874-1948) and the front cover of the book
Preface to the 2017 Online Edition:
The 58-page book “Christianity and Anti-Semitism” contains an essay by Russian philosopher Nicolas Berdyaev, from page one through page 30, and helpful commentaries and notes by Alan A. Spears, on pages 31-58. [1]
Written when Nazism was fashionable, the lucid examination of anti-Semitism presented in this volume is of importance for Christians who have the courage to think, as well as for  theosophists and citizens of good will in general.
Those who are acquainted with the works of Helena Blavatsky know that her voice was among the first to denounce the crimes against humanity committed by the Vatican and a large portion of Christian priesthood. [2]
In the 19th century, when Blavatsky lived, the Jews could scarcely confront the frauds of Christian churches or challenge the violence promoted in the name of Jesus. Now that the State of Israel is a reality, anti-Semitism is still very much active. It often disguises itself under the form of Anti-Zionism. The fact that hatred and intolerance use to conceal themselves is not new, and Berdyaev writes on page eight: “Anti-Semitism takes many forms which can evidently exist together and support each other.”
More than one theosophist forgets in our century that the roots of religious intolerance and fanaticism must be unmasked, understood and abandoned before intercultural dialogue can take place. The task was vigorously started by Blavatsky and her Eastern spiritual teachers in the first years of the theosophical movement. The presence of this duty in the theosophical agenda must not be forgotten.
Nicolas Berdyaev is a reference in Christian honesty regarding the theological crimes and “religious hate”. He admits, for instance, that most Christians do not follow Christ’s teachings. “At all events”, he says on page 27, “true Christians, free from all formalism, nominalism and conventionalism, will always be a minority”. Helena Blavatsky said that real theosophists are seldom too numerous. The New Testament makes similar statements in a number of passages.
While commenting on Berdyaev’s approach to the sickly phenomenon of anti-Semitism, Alan A. Spears writes on page 46:
“Berdyaev’s observations on the Jewish question and its relation with Christianity are to be found in many of his works as well as in the [present] essay. Written in 1940 before the Nazi holocaust had entered its most savage phase, certain parts of it would seem to be outdated. In so far as it alludes to topical events this is indeed so, but for its insight into a problem which remains after the defeat of the erstwhile enemy it is of lasting significance. His message is addressed to Christians and forms an integral part of his message to his generation on all issues which affect Christian life. Berdyaev’s thought is an adventure rather than a closed system since he does not claim to proceed along the theoretic lines of academic philosophy.”
In our century, Berdyaev’s approach to the problem of hatred against the Jewish people has a great practical value for citizens of good will. It is especially useful for those who study eternal wisdom and the law of universal brotherhood.
(Carlos Cardoso Aveline, on 27 August 2017)
Click Here to Read
“Christianity and Anti-Semitism” in PDF
NOTES:
[1] “Christianity and Anti-Semitism”, by Nicolas Berdyaev, with a commentary and notes by Alan A. Spears, Philosophical Library, Inc., New York, USA, 1954, 58 pages.
[2] See for instance volume II of her 1877 book “Isis Unveiled”, which is dedicated to “Theology”.
000