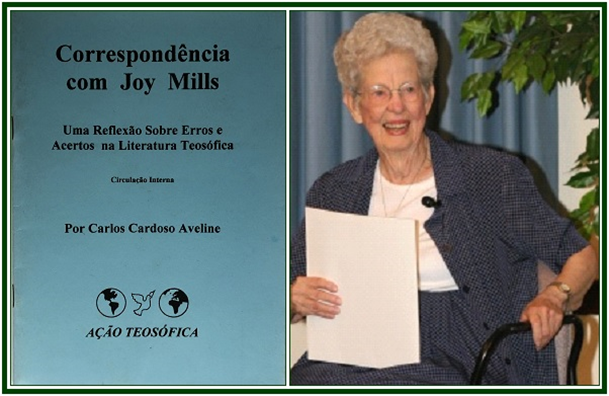 A February 2021 Editorial Note
“Correspondence With Joy Mills” was first published in Portuguese language by “Ação Teosófica” in Brazil, in June 2002. The 42-page booklet entitled “Correspondência Com Joy Mills” is rare and difficult to obtain today.
Although its publication was limited to internal circulation among theosophists, it was criticized in public by Ms. Joy Mills (1920-2015).
In an open letter dated 27 September 2002, the once international vice-president of the Adyar Theosophical Society said that her confession that the writings of Charles Leadbeater are not reliable and are no better than science fiction should have remained in secret. It was inacceptable, she stated implicitly, that the public became aware of the falsity of that literature.
Click Here to Read
Correspondence With Joy Mills
000
“Correspondence With Joy Mills” is available as an independent item in the associated websites since 08 July 2021. It was previously published in four parts in the editions of February, March, April and May 2021 of “The Aquarian Theosophist”.
000
Read more:
* “Annotations on Karma”.
* “M.C.’s Text on Karma, Annotated”.
* “Immortal Sages Humbly Obey the Law”.
* “Are There Conditions Under Which Karma Does Not Exist?”.
000