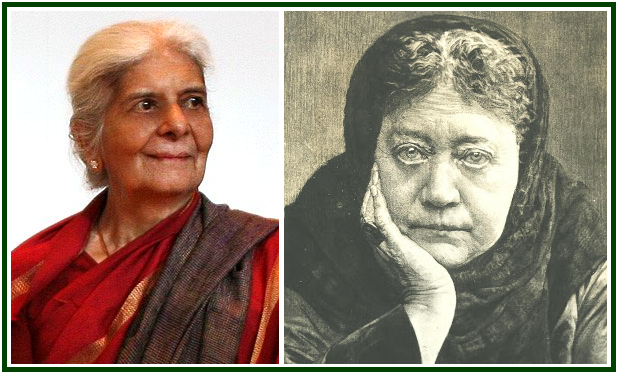 Radha Burnier (1923-2013) did not support the publication of fake and libelous
letters against H. P.  Blavatsky. On the right, HPB’s portrait, if she had lived to be
seventy years old; the central part of a painting by Dutch artist  J. D. Ross (1875-1952).
An Editorial Note:
The present letter was first published at the e-group E-Theosophy, in May 2013. It had this introductory note:
“I share with you a letter written to defend Helena Petrovna Blavatsky’s life and work from an underhand attack (dated December 2003 and still operating) through the Theosophical Publishing House, Wheaton, U.S.A. We bear in mind the words by Robert Crosbie:  ‘while we condemn the act, we never condemn the actor’; and the words in the ‘Key to Theosophy’, by the end of chapter 3: ‘To begin with, no Fellow in the Society, whether exoteric or esoteric, has a right to force his personal opinions upon another Fellow’; – much less through a theosophical publishing house. With this little attempt, it is hoped that the fogs and clouds of old falsehoods against one of the Great Founders of the modern Theosophical Movement will be dispelled very soon by the Light and the vortex of heart force that continue to flow more and more abundantly through the minds and hearts of many earnest theosophists. See below the letter addressed to responsible members of the Adyar T.S. in the USA. Marco Bufarini.”
00000
Defending the Old Lady from Rome
To
Mr. Tim Boyd, president of the Adyar T.S. in the USA
Mr. John Algeo, c/o Mr. David Bruce, national secretary of the Adyar T.S. in the USA
Mrs. Nicole Krier Smoley, publisher of the TPH/Quest Books in the USA
Theosophical Society in America
1926 N. Main Street, Wheaton, IL 60187
USA
Rome, Italy 13th April 2013
Dear Friends,
We are three associates of the Italian Theosophical Society, S.T.I.
We have noted in the book “The Letters of H.P. Blavatsky”, published in December 2003 and still circulating after 10 years, there are about 27 false letters which are also libelous regarding H. P. Blavatsky, as the international president herself, Ms. Radha Burnier, affirms.
These letters are inappropriately ascribed to H.P. Blavatsky and their originals naturally never appeared.
A more serious fact is that they contain immoral, and intellectually putrescent statements, in complete contrast to the spiritual richness which flows from H.P.B.’s words.
Moreover, it is to be noted that such letters are presented as if they were authentic, without a clear warning regarding their source: Mr. Vsevolod Sergueyevich Solovyov. That man forged the letters ascribed to H.P.B., and he was one of the many foes of the Theosophical Society and of H.P.B., personally.
The propagation of such false letters with worthless statements on the life and figure of H.P.B.; without any warning on the character of their fraudulent nature; published as if they were authentic; diffused in the name of the T.P.H., important american theosophical publishing house . . . These facts make us worry about the pernicious consequences and effects that this circulation has produced and may still bear if the readers will not be cautioned with a public announcement and/or an errata on the fake nature of such “letters”.
We invite You and the T.P.H. editorial council to publish as early as possible, in the light of these facts, both a public announcement on the fake character of these letters and an errata.
We have confidence in your discernment, and we know that Theosophy is imperishable.
With consideration and respect,
Mr. Oreste Rotundo
President of the group “Lumen H.P.B.”
Rome, Italy
Mr. Alfredo Stirati
Rome, Italy
Mr. Marco Bufarini
Rome, Italy
000
In September 2016, after a careful analysis of the state of the esoteric movement worldwide, a group of students decided to form the Independent Lodge of Theosophists, whose priorities include the building of a better future in the different dimensions of life.
000