A Fragment from the
Book “The Hundredth Monkey”
Ken Keyes Jr. 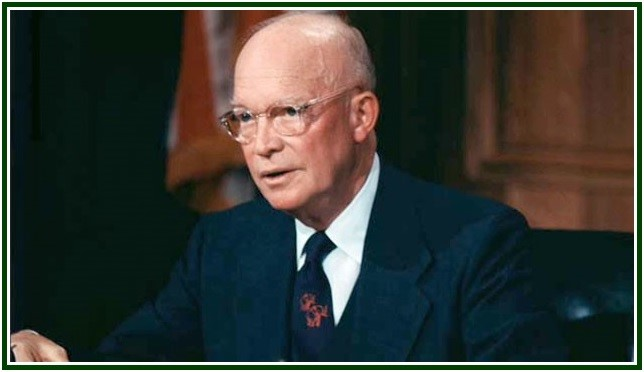 Dwight Eisenhower (1890-1969)
Dwight D. Eisenhower, who served as a five-star general in World War II and who also served as President of the United States, could speak as “… one who has witnessed the horror and the lingering sadness of war – as one who knows that another war could utterly destroy this civilization which has been so slowly and painfully built over thousands of years….”.
In 1953, Eisenhower said, “every gun that is made, every warship launched, every rocket fired, signifies in a final sense a theft from those who hunger and are not fed – those who are cold and not clothed. This world in arms is not spending money alone – it is spending the sweat of its laborers, the genius of its scientists, the hopes of its children.”
By 1959, this general and statesman said:
“I like to believe that people in the long run are going to do more to promote peace than are governments. Indeed, I think that people want peace so much that one of these days governments had better get out of their way and let them have it.”
The Council for a Livable World has pointed out that military expenditures of themselves are destructive to human life – even if the weapons they stockpile are never used.
The people of Earth are now spending one million dollars per minute on armaments! Once we stop preparing to blast each other apart, we will find that we can easily solve all the world’s hunger [1], water and shelter problems.
NOTE BY KEN KEYES, JR.:
[1] More than 18 billion dollars in arms sales were made to Third World countries in 1980 – up from 8 billion in 1975. Let them eat – guns?!
000
The above text is reproduced from the best-selling book “The Hundredth Monkey”, by Ken Keyes, Jr., Vision Books, Oregon, USA, 1989, 176 pp., see pp. 81-85. Part of it is also published at the September 2016 edition of “The Aquarian Theosophist”, p. 6.
000
See in our websites the article “Eisenhower Denounces Military-Industrial Complex”, which contains a two-minute video with the 34th president of the United States.
000