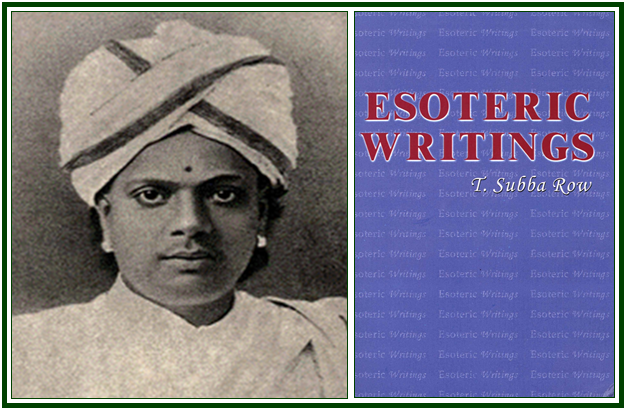 Mr. Subba Row (left) and the front cover of the 2002 edition of “Esoteric Writings”
Introduction to the 2012 Online Edition
N. C. Ramanujachary
Sri Tallapragada Subba Row (1856-1890) had a very short period of life and yet his contribution to the work of the Theosophical Association is highly rich and commendable. It not only was interwoven with the Founders of the Movement but too equally with Sir S. Subramania Iyer and Sri Tukaram Tatia who were the principal instruments to bring his writings under covers of print.
“A Collection of Esoteric Writings of T. Subba Row, F.T.S., B.A., B.L.” was brought out, posthumously, by the Bombay Theosophical Publication Fund in 1895, and this underwent two reprints thereafter. Some articles therein were also issued out by different publishing agencies, over the years, as pamphlets and booklets.
In his preface to the original edition of “Esoteric Writings”, Sri Tukaram writes thus:
“Whilst presenting this little volume to the public, we cannot but pay tribute to the memory of one who had done such good service to the cause of Occult Science. (….) Blavatsky used always to consult him whenever there were difficult and intricate problems to be solved. She had at one time sent the manuscripts of her most valuable work ‘The Secret Doctrine’ to him for correction and alteration; but he declined to undertake the work because he believed the world was not yet prepared to accept the disclosures of those secrets which had been, for good reason, hitherto kept within the knowledge of the sacred few. (….)  Though most of the articles reproduced here are of controversial character, the reader will find them of sterling worth and merit on account of the originality of thought displayed and the able treatment of the various points controverted.  And, moreover, they teem with learned and useful suggestions for progress of the students of Occult Science. (….)  Besides these articles, we are in possession of several notes of a miscellaneous character, regarding the private instructions given by Mr. T. Subba Row to the ‘chosen few’ who had the good fortune to be in close contact with him. [1] He had also made contributions to the local newspapers and magazines, but we think it unnecessary to reprint these, as they are solely on questions political and social…..”
There are groups of keen students of Occult and theosophical studies, the world over, studying his writings in depth and further the methods of research indicated by him. As envisaged by him elsewhere, “it ought to be the duty of every one of us to try to enlighten our men on the philosophy of religion, and endeavor to lead them back to a purer faith – a faith which, no doubt, did exist in former times, but which now lives in name or in the pages of forgotten book.”
It is a very pleasing and heartening factor for me that his precious writings are now being brought online through  www.TheosophyOnline.com ,  www.FilosofiaEsoterica.com and their  associated websites.  The discerning readers will surely be benefitted by this benevolent action.
Dr. N. C. Ramanujachary
Adyar, Chennai, 04 May 2012.
NOTE:
[1] These notes have been procured later by Sri C. Jinarajadasa, who brought out in 1931 the revised and enlarged edition of the 1895 book under the present title “Esoteric Writings”. There was a reprint in 1980, and another edition in 2002, which is presently published online in PDF.  The 2002 edition mistakenly reports that the first edition occurred in 1951, while in fact the 1980 reprint correctly reported: “First edition, 1895; Second Edition, Revised & Enlarged, 1931; Third Printing, 1980.”
Click Here to Read the Book
“Esoteric Writings”, by T. Subba Row, in PDF
000
Dr. N. C. Ramanujachary wrote the book “The Lonely Disciple”, a Monograph on T. Subba Row, which is published online and can be found in our associated websites.
000