The Path to Discipleship Depends on
Self-Knowledge, Not Blind Obedience
A Mahatma of the Himalayas 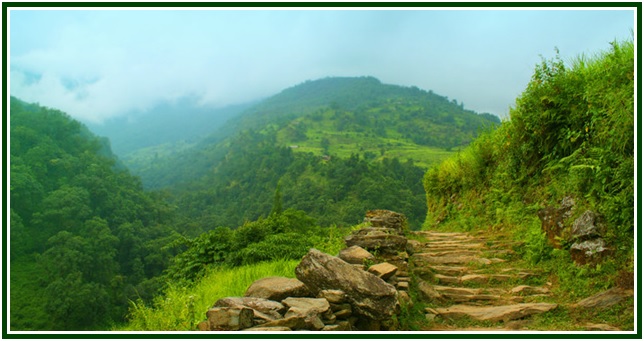 0000000000000000000000000000000000000
A 2015 Editorial Note:
The following fragments are reproduced
from “The Mahatma Letters”, T.U.P. edition,
Pasadena, California, Letters LXIV, LXV and
LXVI, pp. 358-367. The number of the page is
given in parenthesis at the end of each quotation.
Readers will remember that the word “chela”
means “disciple”, and “chelaship”, discipleship.
In the original letter LXV, the Master wrote
“Raj-Yog”: we have completed the expression
as in its more popular usage: “Raja Yoga”.
(Carlos Cardoso Aveline)
0000000000000000000000000000000000000000000
“The aspirant is now assailed entirely on the
psychological side of his nature. His course of
testing – in Europe and India – is that of Raja-yoga…”
* Ah, how long shall the mysteries of chelaship overpower and lead astray from the path of truth the wise and perspicacious, as much as the foolish and the credulous! How few of the many pilgrims who have to start without chart or compass on that shoreless Ocean of Occultism reach the wished for land. (358)
* Believe me, faithful friend, that nothing short of full confidence in us, in our good motives if not in our wisdom, in our foresight, if not omniscience – which is not to be found on this earth – can help one to cross over from one’s land of dream and fiction to our Truth land, the region of stern reality and fact. Otherwise the ocean will prove shoreless indeed; its waves will carry one no longer on waters of hope, but will turn every ripple into doubt and suspicion; and bitter shall they prove to him who starts on that dismal, tossing sea of the Unknown, with a prejudiced mind! (358)
* Self personality, vanity and conceit harboured in the higher principles are enormously more dangerous than the same defects inherent only in the lower physical nature of man. They are the breakers against which the cause of chelaship, in its probationary stage, is sure to be dashed to pieces unless the would-be disciple carries with him the white shield of perfect confidence and trust in those he would seek out through mount and vale to guide him safely toward the light of Knowledge. (359)
* The mass of human sin and frailty is distributed throughout the life of man who is content to remain an average mortal. It is gathered in and centred, so to say, within one period of the life of a chela – the period of probation. That, which is generally accumulating to find its legitimate issue only in the next rebirth of an ordinary man, is quickened and fanned into existence in the chela – especially in the presumptuous and selfish candidate who rushes in without having calculated his forces. (359-360)
* If you would learn and acquire Occult Knowledge, you have, my friend, to remember that such tuition opens in the stream of chelaship many an unforeseen channel to whose current even a “lay” chela must perforce yield, or else strand upon the shoals; and knowing this to abstain for-ever judging on mere appearance. (361)
* What grumblings, what criticism on [the] Devachan [teachings] [1] and kindred subjects for their incompleteness and many a seeming contradiction! Oh blind fools! They forget – or never knew that he who holds the keys to the secrets of Death is possessed of the keys of Life? (365)
* Why is it that doubts and foul suspicions seem to beset every aspirant for chelaship? My friend, in the Masonic Lodges of old times the neophyte was subjected to a series of frightful tests of his constancy, courage and presence of mind. By psychological impressions supplemented by machinery and chemicals, he was made to believe himself falling down precipices, crushed by rocks, walking spider-web bridges in mid-air, passing through fire, drowned in water and attacked by wild beasts. This was a reminiscence of and a programme borrowed from the Egyptian Mysteries. The West having lost the secrets of the East, had, as I say, to resort to artifice. But in these days the vulgarization of science has rendered such trifling tests obsolete. (365)
* The aspirant is now assailed entirely on the psychological side of his nature. His course of testing – in Europe and India – is that of Raja-yoga and its result is – as frequently explained – to develop every germ good and bad in him in his temperament. The rule is inflexible, and not one escapes whether he but writes to us a letter, or in the privacy of his own heart’s thought formulates a strong desire for occult communication and knowledge. As the shower cannot fructify the rock, so the occult teaching has no effect upon the unreceptive mind; and as the water develops the heat of caustic lime so does the teaching bring into fierce action every unsuspected potentiality latent in him. (365-366)
* Few Europeans have stood this test. Suspicion, followed by self-woven conviction of fraud seems to have become the order of the day. I tell you with a very few exceptions — we have failed in Europe.  (366)
* Every step made by one in our direction will force us to make one toward him. But it is not by going to Ladak [2] that one shall find us…. (366)
* Beware then, of an uncharitable spirit, for it will rise up like a hungry wolf in your path, and devour the better qualities of your nature which have been springing into life. Broaden instead of narrowing your sympathies; try to identify yourself with your fellows, rather than to contract your circle of affinity. (367)
NOTES:
[1] This axiomatic statement has a decisive value for those who want to understand esoteric philosophy. On the fascinating topic of the Devachan and the whole process between two terrestrial incarnations, one can see the letters 16, 19, 20-A, 20-B, 20-C, 23-A, 23-B, 24-A, 24-B, 25, and 86, among others in “The Mahatma Letters” (TUP edition).  (CCA)
[2] Ladak – a city in Asia which the Mahatmas frequently visited in the 19th century. (CCA)
000
On the role of the esoteric movement in the ethical awakening of mankind during the 21st century, see the book “The Fire and Light of Theosophical Literature”, by Carlos Cardoso Aveline.