We All Have Something Unique to Offer
Donald J. Trump 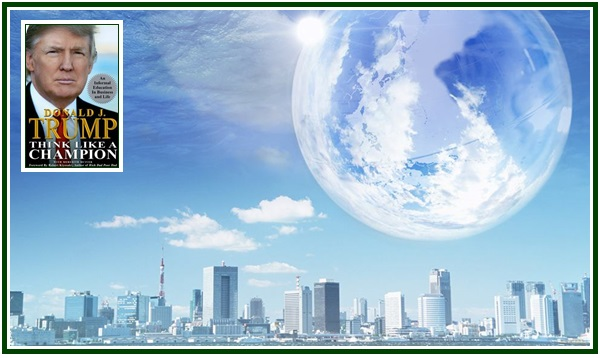 “One thing I’ve learned about
life is that it is a series of discoveries.
It starts with discoveries and hopefully
should continue that way.” [1]
Donald J. Trump
Your higher self is in direct opposition to your comfort zone. An indication of life is growth, and signs of growth have to be there. You’ve heard people refer to a city as vibrant, and what that means is that it’s growing and it’s lively – it is not stagnating. See yourself as a city if you must, with all the inner and outer workings necessary to keep yourself thriving and efficient.
There are so many “fine lines” in life that when people say life is an art, they’re not too far off. I’ve said before that I see my work as an art form, and that’s one reason why. We all know that fine line between something great and something extraordinary. Sometimes it’s almost imperceptible, or impossible to define. What makes da Vinci’s Mona Lisa so exceptional? There are millions of different answers, but it mesmerizes people. It’s mysterious and brings us to another realm, a different dimension.
Our higher selves can serve to transport us to becoming visionaries. The word visionary evokes a lot of images and definitions, some even being a “castle-builder” or a Don Quixote. It often connotes someone who is idealistic. There is nothing wrong with that as long as it’s contained within reason. Visionaries move the world along into new dimensions. Look at Bill Gates, for example, in technology; or Mark Burnett in reality TV; or Pablo Picasso, Stravinsky, and other greats of the twentieth century. They were groundbreakers who followed their own instincts and led us in new directions.
Our higher self will often lead us into new waters, and for a good reason. No one wants to spend their life treading water just to keep from going under. That is futile and disheartening. Sometimes we do things to build up experience and stamina to prepare us, but it’s to prepare us for something bigger. Always know you could be on the precipice of something great – that’s being connected to your higher self. It’s also a good way to keep those negative thoughts far away.
Sometimes our goals aren’t necessarily concrete. Sometimes it’s a feeling of something great that will happen, and so we’re open to it. That doesn’t mean we sit around waiting for something to just happen – very often it happens while we’re working away on something else. Being industrious can be a magnet for new ideas, while idleness and inertia can be magnets for negativity.
One of the worst fears we can have is the fear to attempt something. That can leave you feeling bereft for no particular reason except that maybe you will have missed your purpose. There is always the possibility of failure, but there is a greater chance of success if you actually try to do something versus doing nothing. I wasn’t sure I’d be a success on the radio, but I went for it and my program on Clear Channel was a big hit. But I had to take the chance first to find out.
Life can be an adventure of the best sort if you will give your higher self a chance. We all have something unique to offer. Our work is to find out what that is and to work at it with a passion. So don’t tread water. Get out there and go for it.
NOTE:
[1] From “Think Like a Champion”, by Donald J. Trump (with Meredith McIver), Da Capo Press, Philadelphia, 2009, 204 pp., see p. 147.
000
The above text is reproduced from the March 2016 edition of “The Aquarian Theosophist”, pp. 6-7.  It was first published at the book “Think Like a Champion”, by Donald J. Trump (with Meredith McIver), Da Capo Press, Philadelphia, 2009, 204 pp., pp. 27-29.  It corresponds to almost the entire chapter “Give Your Higher Self a Chance”: only the first paragraph was omitted from the present transcription.
000
On the role of the esoteric movement in the ethical awakening of mankind during the 21st century, see the book “The Fire and Light of Theosophical Literature”, by Carlos Cardoso Aveline.