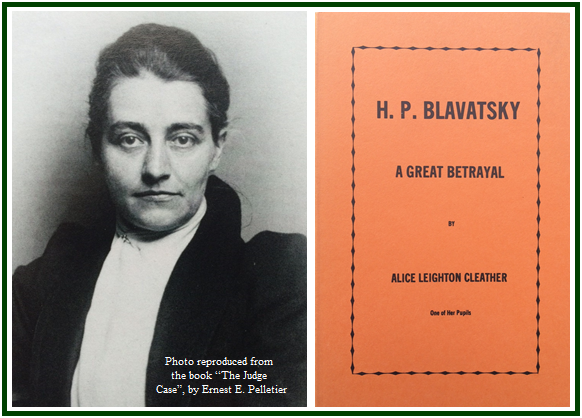 Ms. Alice Leighton Cleather (1846-1938) remained loyal to ethics
A 2013 Editorial Note:
The law of karma is dynamic and no mistake is eternal, for the very purpose of life is to learn. As a result of this, the theosophical movement is getting rid in the 21st century of the organized falsity created by Annie Besant and her associates in the 1895-1934 period.
The victory of ethics was in part prepared by the pioneers who, although unable to prevent a short-term victory of disloyalty, succeeded in documenting facts so that the following generations could know them well and act accordingly when the right time came.
Alice L. Cleather was a personal student of Helena Blavatsky in London, and published various testimonies written in plain language. Her 1922 book “H.P. Blavatsky: A Great Betrayal” is a bright example of sincerity and love of truth. Ms. Cleather deserves the gratitude of all theosophists for having chosen truth, instead of mere politics.
(Carlos Cardoso Aveline)
000
H.P. Blavatsky: A Great Betrayal
Alice Leighton Cleather
Foreword
[September, 1922]
This Protest has been undertaken at the earnest and repeated requests of Theosophical friends of long standing. They feel strongly that the time has come for one of H. P. Blavatsky’s old pupils, who was a member of her Inner Group [1], to demonstrate as clearly as possible that the teachings promulgated for nearly twenty years past by the present leaders of the “Theosophical Society” have departed more and more from H.P.B.’s, and are now their direct antithesis, particularly on the fundamental question of sex morality.
Since Mr. G. R. S. Mead, one of my fellow-members of the Inner Group, spoke out at the Leadbeater Inquiry of 1906, and resigned, no other surviving member, so far as I have been able to ascertain, has attempted to stem the awful and ever increasing tide of horror and delusion, that is, engulfing – one might almost say has engulfed – Mrs. Besant’s Society. If Mr. Mead could say in 1906; – “We stand on the brink of an abyss”, what is to be said now? The enquiries and researches I have undertaken to enable me to write this pamphlet have revealed the present state of things to be far worse than I could have imagined possible.
Click Here to Read the Book
“H.P. Blavatsky: A Great Betrayal”,  in PDF
NOTE:
[1] A reference to the Inner Group of the Esoteric School.  (CCA)
000
See also the text “The Fraud in Adyar Esoteric School”, by Carlos Cardoso Aveline, which is available at our associated websites.
000
In September 2016, after a careful analysis of the state of the esoteric movement worldwide, a group of students decided to form the Independent Lodge of Theosophists, whose priorities include the building of a better future in the different dimensions of life.
000