The Mother of Helena P. Blavatsky
Was a Russian Writer and a Pioneer Thinker
Lydia Bobritsky (comp.) 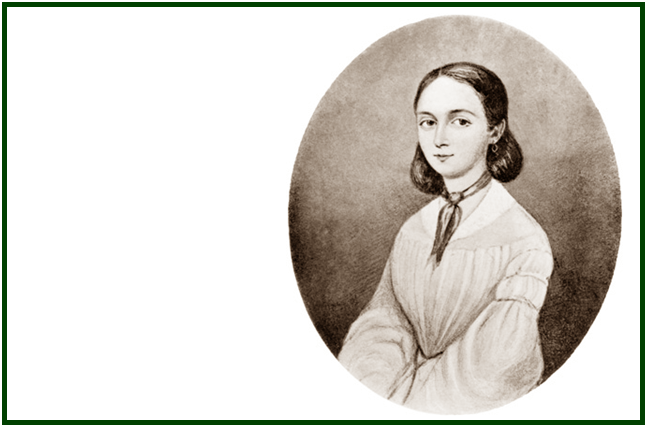 Helena Andreevna Hahn (1814-1843)
“The man with a higher intellect is
intolerable enough to this world, but the
position of a woman, who has been placed by
Nature itself above the crowd is verily desperate.”
(Helena Andreevna Hahn)
A 2012 Editorial Note:
Life could be quick in the 19th century.
Helena Andreevna Fadeev was born 11 January 1814.  At 16, she got married to Captain Peter Hahn.  She was only 17 years old when her daughter Helena Petrovna, later Helena Blavatsky, was born in 1831.
With little more than 20 years of age, Helena Andreevna Hahn was considered the leading female writer of prose fiction in Russia. [1] Celebrated critics, as A. Belinsky, wrote articles on her. She then died at 28, on June 24, 1843.
Belinsky wrote this epitaph to her:
“Peace be unto your ashes, extraordinary woman, victim of the rich talents of your own lofty nature! …..  We thank you for your short life. Not in vain did it bloom like a luxurious, fragrant flower of profound feelings and lofty thoughts. Your soul is in this flower and there will be no death for it!” [2]
In her novels and short stories, Helena Andreevna wrote about the organized selfishness of society.
She said:
“Every outstanding woman, especially a writer, will be persecuted by the world … Her gifts of intellect, her talents all are in vain before the crowd; she will be like a criminal rejected by society.” [3] Helena Petrovna would soon challenge the world in a similar way as her mother did, and would experience the meaning of those sad words; for such were the conditions in the 19th century.
We reproduce in PDF the article “Helena Andreevna Hahn” from the magazine “The Theosophical Forum”, August 1948 edition pp.  449-457. The text was translated and compiled by Lydia Bobritsky from the Preface to the “Complete Works of Elena A. Hahn”, published in 1905.
(Carlos Cardoso Aveline)
Click Here to Read
“Helena Andreevna Hahn” in PDF
NOTES:
[1] “Dictionary of Russian Women Writers”, available online.
[2] “HPB – The Extraordinary Life and Influence of Helena Blavatsky, Founder of the Modern Theosophical Movement”, Sylvia Cranston,  published by Jeremy Tarcher / G.P. Putnam’s Sons, New York,  USA,  1993,  648 pp.,  p. 23.
[3] “HPB – The Extraordinary Life and Influence of Helena Blavatsky, Founder of the Modern Theosophical Movement”, Sylvia Cranston, p. 24.
000
On the role of the esoteric movement in the ethical awakening of mankind during the 21st century, see the book “The Fire and Light of Theosophical Literature”, by Carlos Cardoso Aveline.