H. P. Blavatsky Has a “Bird’s Eye View”
Of The Theosophical Movement, While Adyar
Turns Further Away From Her and From The Masters
Helena P. Blavatsky 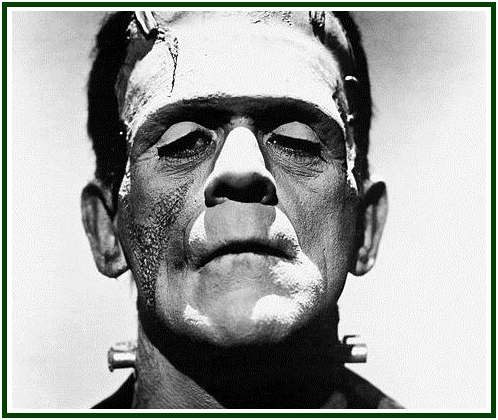 The metaphor of Frankenstein is used in this
Letter again as a symbol of pseudo-theosophy
A 2011 Editorial Note:
“Take my place in America
now & after I am gone – at Adyar.”
(H.P.B. to W.Q. Judge)
The following letter from H. P. Blavatsky is dated August 12, 1887. It was her birthday.
As most of the texts in the present series, the document is part of the Blavatsky Letters in the Andover-Harvard Divinity School Library. We reproduce it from “Theosophical History” magazine, volume V, Number 5, January 1995, pp. 164-168.  We follow the transcriber, Mr. Michael Gomes in including as an appendix to the present document a letter from Bertram (“Bert”) Keightley to W.Q. Judge, with commentaries from H.P. Blavatsky.
Underlined words are thus in the original. Sometimes, they are underlined with a double line in the transcription made by Mr. Gomes. We don’t take that into consideration. Words in brackets, followed by question marks, are attempts by the transcriber to understand the original.
“Theosophical History” publishes a few commentaries to the contents of this letter. Written by the transcriber, they show he does not see the events from a theosophical viewpoint, but interprets them instead as a mere question of H.P.B. being personally “impatient” regarding the personalities of other people. The attachment of some to the personal view of life is a natural process, which corresponds to a certain level of development of human souls.  It should not be, therefore, an irritating factor for students of theosophy. The task of rescuing and publishing historical documents is valuable enough in itself and Mr. Gomes must receive thanks for his efforts.  It would not be realistic to expect that in addition to making an honest work as an archivist and transcriber he should be able to understand the H.P.B. letters beyond the level of outer facts and “personal” appearances.
The present letter contains the famous “bird’s eye view” of the theosophical movement and its future, obtained by H.P. Blavatsky with the help of Masters.
H.P.B. also mentions the problem of the soul-less creature which turns against its creator, and invites Judge to save the theosophical Frankenstein. She indicates the right way to face such a challenge – the problem of a theosophical corporation ruled by its own short-term political interests, and in which love for truth is mainly nominal, being used in part for decorative purposes.  The aim should not be to destroy Frankenstein, but to give him a soul. She closes the letter thus:
“Well I have raised a ‘Frankenstein’ & he seeks to devour me. You alone can save the fiend & make of him a man. Breath into him a Soul if not the Spirit. Be his Saviours in the U.S. & may the blessing of my Superiors & yours descend on you. Yours – the ‘old woman’, but one ready to offer you her inner life, if you begin & proceed with the work, – HPB.”
Elsewhere in the letter, H.P.B. makes in other words the same appeal to W. Q. Judge:
“Take my place in America now & after I am gone – at Adyar.”
Mr. Judge did what he could during H.P.B.’s life, and his efforts went on for a few years after her death until his own life ended, in 1896.  Although the core of the movement was preserved, the Frankenstein problem remains to be solved in the 21st century. That should not be seen as too difficult, if one considers that life usually develops in gradual ways.
We add a few explanatory notes to the Letter and to its Appendix.
(Carlos Cardoso Aveline)
Letters Between Blavatsky and Judge – 10
Helena P. Blavatsky
Aug. 12
My dear W. Q. J.
To explain my telegram of today [1] know, that for several days I kept thinking over your letter & that of Coues – feeling the great responsibility you wanted me to assume. The night before last, however, I was shown a bird’s eye view of the present state of Theosophy & its societies. I saw a few earnest, reliable Theosophists in a death struggle with the world in general, with other – nominal but ambitious – theosophists. The former are greater in numbers than you may think, & they prevailed as you in America will prevail, if you only remain staunch to the Masters programme and true to yourselves. And last night I saw

[2] & now I feel strong – such as I am in my body, and ready to fight for theosophy & the few true ones to my last breath. Are you ready to help me to carry on the sacrifice – that of accepting & carrying on the burden of life, which is heavy? My choice is made & I will not go back on it. I remain in England in the midst of the howling wolves. Here I am needed & nearer to America; there, in Adyar – there are dark plots going on against me & poor Olcott (which you will understand better by reading Bert’s letter & the enclosed one from Olcott) and I could only defend myself – not do any good to the Cause or Society. The defending forces have to be judiciously – so scanty they are – distributed over the globe wherever Theosophy is struggling against the powers of darkness. Let O. [3] remain at Adyar – I will remain here. If you & Coues carry out the plan we will have four great & strong centres. America, Paris, India, England.
The words said by

– “Let both unite & carry out their idea of secret council. But to work effectively two conditions are necessary: (1) work in good faith & full accord, pledged to support each other & remain united in weal or woe success or failure. The latter will never be allowed to reach its acme, if they are true to each other. (2) In order to silence the (“kickers”) & opponents both President & General Secretary must be selected for life.” This can be done by your direct followers & has to be done if you would ensure success & have

to help you in the U.S.A. as “Illarion”[4]  helps here. The President being permanent no kicks will do any good. There is not a man in all the U.S. who is better fitted to fight for theosophy & his Society than E. Coues; there is no man there more devoted to Them & cause, nor more fitted than you are. These are

’s words. Both, you have faults & shortcomings – but your fitness & the peculiar qualifications of both for theosophical work are by far greater. Your polarities so utterly different, can but help to attract people to both ends. They are your strength & power when united in one – the ruin & cause of failure when separated. Unite, unite, I say; & you will have culminated the object for which, after breaking metaphorically each others noses you were led to reconciliation. Take my place in America now & after I am gone – at Adyar. If you have no more personal ambition than I have – & I know you have not, only combativeness – then this will be no more sacrifice for you than it was for me to have Olcott as my President, damn him from morn to night, & still recognize that there is no better man for the work than he is.
“This is no sacrifice for him,” said I -“if I only know my W.Q.J.”- “No; none in reality, but the illusion that it is one, may yet be strong in the ‘old’ man’s body” –

remarked. Is it so? I hope not.
Dixit –  I have no more to say till I receive your answer. I am “yours truly” in the work, for ever. Dispose of me – I will be your thing & help you with all my powers. When – if you do -agree, write to me the instructions & my part of the work & – wait & see.
The “plot at Adyar.” It began a little after the last anniversary. I received an Address signed by 107 names headed by Subba Row, Cooper Oakley, Nield Cook begging me to return to Adyar for the next anniversary. Then S.R. [5] came out with his attack on myself & the 7 principles. (See Bert’s letter.) Today poor Miss Cook who is dying of a cancer writes to Bert in despair to ask what has fallen upon her brother at Adyar. C.O. [6] & S.R. They intrigue to prevent my returning to Adyar, bringing forward the scare of “Russian spy,” of padris etc. They write letters (not S.R.) incessantly that Master is against me & directs S.R. (!) how to palliate the evil I have done!! That the L.L. is positively lost, having fallen under my evil influence & being psychologized by me. Olcott as you see writes that the Council has passed a unanimous resolution to ask me to postpone my return.
I knew all this; I knew the meaning of Nield Cook’s sentence: Subba Row is the only one to save the Society (founded by me!!) & he is preparing a great Reform. Poor fools! Well I have raised a “Frankenstein” & he seeks to devour me. You alone can save the fiend & make of him a man. Breath into him a Soul if not the Spirit. Be his Saviours in the U.S. & may the blessing of my Superiors & yours descend on you.
Yours – the “old woman,”
but one ready to offer you her inner life, if you begin & proceed with the work
HPB
Please draw Coues attention to a new book that appeared by our enemy Lillie “Buddhism in Christendom.” Read pp. 358 & 404 & tell me if there can be found any worse libel than this! [7]
NOTES:
[1] The transcriber says H.P.B. had telegraphed from London to both Judge and Coues on August 12.  The telegram received by Judge, which is at the archives of the Theosophical Society (Pasadena), reads: “Master suggests your being what I am Secretary for life if ready to sacrifice he will help. Upasika.” Coues would then be the president of the T.S. in America. The present letter was written on the same day as the telegrams.
[2]