An Attempt to Prevent the
Publication of “The Secret Doctrine”
Helena P. Blavatsky 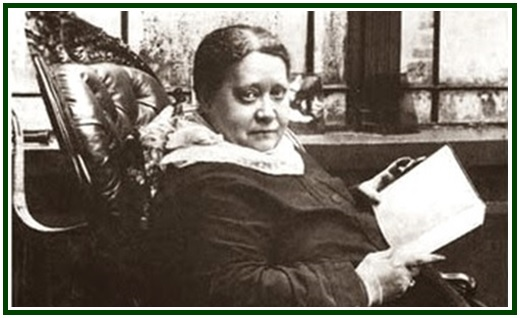 !!! That he showed Sanskrit letters from Him (no handwriting no indiscrete calligraphy – in Sanskrit!) to himself & translated them to C.O. The letters were to the effect that he, S.R. had to reform the Society & hinted that I, HPB, had been given up by the Masters!! C.O. who has chosen S.R. for his guru, who worships him as does N. Cook, believes in him explicitly. What are the “muslin & bladder Mahatmas” of the Coulombs compared to such doings!!
Bus, bus [9] – I must say nothing, however much I may be disgusted. But, as the ranks thin around us, & one after the other our best intellectual Forces depart to turn bitter enemies – I say –  Blessed are the pure hearted who have only intuition for intuition is better than intellect. I will copy your paper [&] send it to you this week.
Yours ever,  HPB
NOTES:
[1] Mr. Elliott Coues.
[2] “Adyar is collapsing”. H.P.B. does not refer here to any sort of political or institutional collapse. It was an ethical collapse, the collapse of loyalty to truth, to theosophy, and to the Masters that was taking place. An occult and moral collapse is much more serious than a merely institutional one.
[3] Henry Olcott.
[4] The transcriber of the letter, Michael Gomes, reports that Hystaspes was a name Coues had given himself. It’s a reference to the Persian conqueror Darius Hystaspes. In this passage, therefore, H.P.B. counts on an alliance between Coues and Judge and says that even this alliance is hardly strong enough to face the challenges ahead.
[5] “Conquering the kingdom of Heaven”. This idea appears in expanded form in the Letter 2 of the Mahatma Letters:
“He who would lift up high the banner of mysticism and proclaim its reign near at hand, must give the example to others. He must be the first to change his modes of life; and, regarding the study of the occult mysteries as the upper step in the ladder of Knowledge must loudly proclaim it such despite exact science and the opposition of society. ‘The Kingdom of Heaven is obtained by force’ say the Christian mystics. It is but with armed hand, and ready to either conquer or perish that the modern mystic can hope to achieve his object.” (“The Mahatma Letters”, TUP edition, Pasadena, California, 1992, pp. 6-7)
[6] In the following sentence, the transcriber has used empty square brackets to mark the places where words have been scratched out in ink.
[7] The transcriber writes at this point: “The Supplement to ‘The Theosophist’ for June 1888, p. xli, carried a brief three line note to the effect that T. Subba Row and J.N. Cook had resigned their membership in the Theosophical Society.”
[8] See the open letter published in the February 1888 edition of “The Path” and reproduced above.
[9] “Bus, bus”.  A note by the transcriber explains that this is a Hindi expression meaning “enough” or “that will do”.
000
On the role of the esoteric movement in the ethical awakening of mankind during the 21st century, see the book “The Fire and Light of Theosophical Literature”, by Carlos Cardoso Aveline.