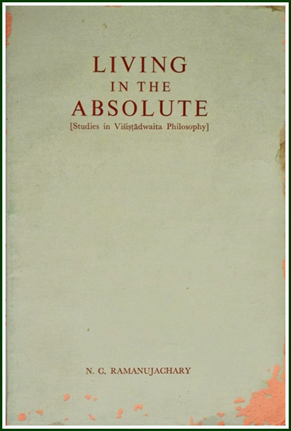 Front cover of the 1985 edition
Foreword to the 2014 Online Edition:
Visishtadwaita is a definite branch of the Indian system of Philosophical Thought, where the marked distinction is that the “Individual soul” though absorbed in the “Universal Soul”, ultimately maintains its own Identity and thus Lives in the Absolute as a NITYA SURI (Eternal Solar-being).
The Divinity is the Source of all manifestation and the Supreme Power is anthropomorphized for purposes of easier comprehension and idealization of the devotees. One is supposed to travel from the “Idol” to the “Idea” and the “Ideal”.
Devotion is the direct Path to obtain Immortality. “The Grace of Divinity” is causeless and freely flows over the Universes for the enjoyment of the living-beings (sentient and non-sentient) and a devotee needs to draw that grace by his own merit and endeavor.
The Philosophy was popularized by Sri Ramanujacharya (1017-1137 AD), who wrote commentaries to the Brahma-Sutras, Upanishads and Bhagavad-Gita. His Commentary is renowned as SRIBHASHYA. He was in favor of a Social Order devoid of caste, color and race; only unfettered devotion to the Supreme Lord to be the “talisman” for Life and Living.
The text is intended for those who need to be familiarized with the basic concepts of this philosophy and so is divided into three sections: “The Essential Teachings”, “Five Bases for Wisdom”, and “A Code of Human Conduct”.
The place given to the Teacher (Preceptor) in this system is identical to what is said as the steps in the Golden Stairs “A Loyal Sense of Duty to the Teacher” and “Once we have placed our confidence in and believe the Teacher in possession of it”. The place given to the co-disciple is a significant factor in Universal Brotherhood of Humanity. The Parallels and Dis-similarities with Theosophical philosophy are dealt with in my other book “The Human and The Divine”. [1]
I am rejoiced that “The Aquarian Theosophist” and its associated websites are publishing this slim book online for the benefit of those who have an interest in Comparative Religion and Culture.
Dr. N. C. Ramanujachary
Chennai, India, 24 February 2014.
Click Here to Read the Complete
Book “Living in the Absolute” in PDF
NOTE:
[1] The volume “The Human and the Divine”, by N. C. Ramanujachary, is also available in our associated websites.
000
On the role of the esoteric movement in the ethical awakening of mankind during the 21st century, see the book “The Fire and Light of Theosophical Literature”, by Carlos Cardoso Aveline.