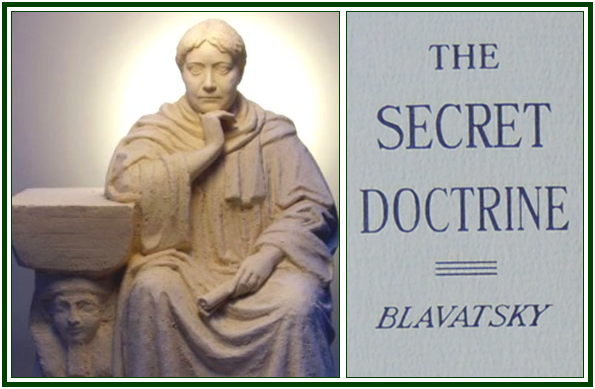 On the left, partial view of a statue of HPB made by Ukrainian artist Alexey Leonov
A 2017 Editorial Note:
In its various divine, human, animal and material dimensions, Life combines contrast and unity, and evolves through constant cyclic change.
In the following passage from “The Secret Doctrine” Helena P. Blavatsky examines the levels of association and dissociation between the divine and the human, on one hand, and between the healthy human and animalized human, on the other.
Yet this was not the first time HPB wrote about the matter.
More than a decade before “The Secret Doctrine”, she had said in “Isis Unveiled”:
“… If (…) the ‘soul’, as a half animal principle, becomes paralyzed, and grows unconscious of its subjective half – the Lord –  and in proportion to the sensuous development of the brain and nerves, sooner or later, it finally loses sight of its divine mission on earth. (…..)”
Click Here to Read
“Paradox and Unity in Life”, in PDF
000
E-Theosophy e-group offers a regular study of the classic, intercultural theosophy taught by Helena P. Blavatsky (photo).