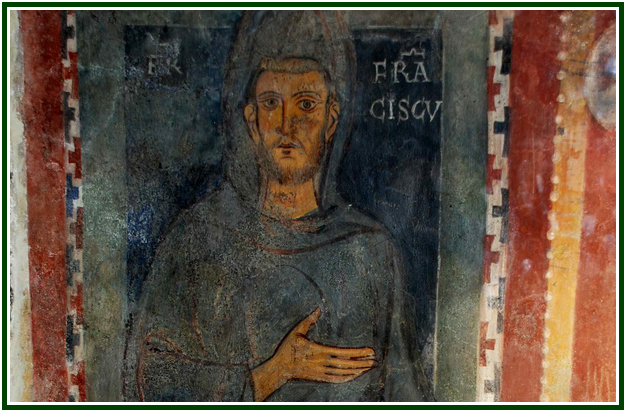 A classic portrait of Saint Francis of Assisi
From a theosophical point of view, the expression of personal requests in prayers can only be symbolical. The “Lord” to whom many prayers are addressed is in fact one’s own higher self, his immortal soul, and also the Universal Law.
In making the prayer, the pilgrim talks to his impersonal spiritual mirror, which faithfully reflects the divine potentialities of the mortal soul. Under the poetical guise of a humble request, he expresses his own independent will and adopts the attitude of a self-responsible being.
In one of her works, Elisabeth Kübler-Ross publishes a version of the famous prayer by St. Francis of Assisi, adapted to therapists and healers in general.
The prayer says:
LORD,
Make me an instrument of your health:
where there is sickness,
let me bring cure;
where there is injury,
aid;
where there is suffering,
ease;
where there is sadness,
comfort;
where there is despair,
hope;
where there is death,
acceptance and peace.
GRANT that I may not:
so much seek to be justified,
as to console;
to be obeyed,
as to understand;
to be honored,
as to love. …
for it is in giving ourselves
that we heal,
it is in listening
that we comfort,
and in dying
that we are born to eternal life. [1]
The prayer is not limited to professional healers who perceive the ethical and spiritual dimension of their work.
Anyone who seeks for universal wisdom tends to radiate higher feelings and thoughts around him. Such individual thus becomes up to a certain point a healer, a therapist, and someone who spreads relief among those who suffer.
From a philosophical point of view, one must be able to see the difference between the Cure and the Anaesthesia; between the real relief of pain and the fruitless escape from it; true liberation and a limited struggle against the external effects of suffering. There is a subtle abyss between these two possibilities.
The treatment that leads to an effective elimination of suffering may not be pleasant at first sight.
Every patient who suffers from the disease of spiritual ignorance will have to recognize in his own self the adversaries called fear of healing and resistance to the remedy. These two opponents lead him to reject, in partially unconscious ways, the direct perception and first-hand experience of universal wisdom.
Both the therapist and the spiritual pilgrim must make one central fact clear to their fellow-beings:
“That which is good, that which heals and does good, is not always pleasant; and, on the other hand, that which seems to be pleasant is often not good, does no heal, nor does good.”
A certain degree of indifference to short-term pain is therefore unavoidable for the true healing to occur, be it physical or spiritual.
An attachment to personal satisfaction and the childish escape from everything that seems unpleasant are two twin sources of the internal imbalance that leads one to the absence of health, on the various levels of life.
When one is aware of these facts, the healing gets deeper and more enduring.
As long as the truth-seeker and the therapist are in full contact with the inner bliss and health, they will radiate courage, confidence and bliss around them. Wherever they are, they stimulate other beings to directly connect in their souls with the inner source of health and well-being.
Experienced therapists and theosophists avoid administering too much of short-term anaesthesia to others. Because of this, one needs a degree of discernment to recognize them, and far more discernment is necessary to gradually become a helping hand oneself.
In the long run, the path of healing is a process of self-realization, self-regulation and self-fulfilment, which occurs in an atmosphere of solidarity and in inner communion with other beings.
NOTE:
[1] “Prayer of Saint Francis”, modified by Charles C. Wise, and published as “Prayer for Healers” in the opening pages of the work “Death, the Final Stage of Growth”, by Elisabeth Kübler-Ross, Prentice-Hall, New Jersey, USA, 1975, 182 pp.
000