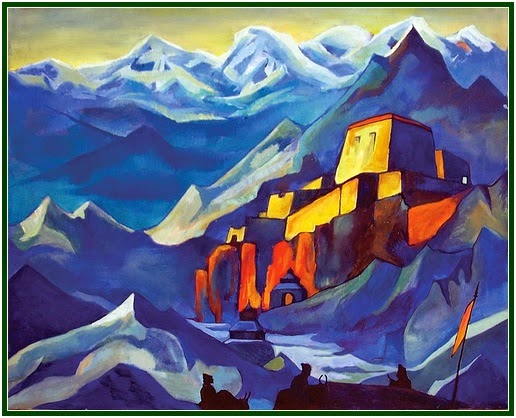 A painting by Nicholas Roerich
A 2014 Editorial Note:
There are a number of reasons why the philosophy of universal wisdom ascribes great importance to precepts and axioms. Precepts express fundamental principles in a few words. They are easy to remember and can be appreciated in contemplative silence. It is easier to contemplate one sentence full of meaning than to be benefitted by an ocean of useless words. Thus the memory of a student can contain in itself a small library for his personal use.
As a researcher in ancient wisdom, Russian thinker Helena Petrovna Blavatsky paid special attention to the daily reflection upon precepts and axioms. In 1890, a compilation was published in London of Eastern thoughts which had been collected and written down by her. It presented one idea for each day of the year and had the title “Gems From the East”.  The book   is now part of volume XII in the “Collected Writings” of H.P. Blavatsky (TPH, USA, pp. 425-476). The “Collected Writings” reproduce the 1948 edition of “Gems from the East”, published by T. U. P. / Covina, USA.
The following precepts and axioms are a partial selection from the months of January, February and March.  We recommend the reading of the whole work. The practical usefulness of any precepts and axioms is in direct proportion to the attention and determination with which they are observed and preserved in the memory of a student.
(Carlos Cardoso Aveline)
000
Precepts and Axioms from the East
Helena P. Blavatsky
* The heart which follows the rambling senses leads away his judgment as the wind leads a boat astray upon the waters.
* He who casts off all desires, living free from attachments, and free from egoism, obtains bliss.
* Wise men are light-bringers.
* A just life, a religious life, this is the best gem.
* False friendship is like a parasitic plant, it kills the tree it embraces.
* Men who have not observed proper discipline, and have not gained treasure in their youth, perish like old herons in a lake without fish.
* He who hath too many friends, hath as many candidates for enemies.
* That man alone is wise, who keeps the mastery of himself.
* All our dignity consists in thought, therefore let us contrive to think well; for that is the principle of morals.
* Narrowness of mind causes stubbornness; we do not easily believe what is beyond that which we see.
* A narrow stomach may be filled to its satisfaction, but a narrow mind will never be satisfied, not even with all the riches of the world.
* He who neglects his duty to his conscience, will neglect to pay his debt to his neighbor.
* Two things are impossible in this world of Maya [Illusion]: to enjoy more than Karma hath allotted; to die before one’s hour hath struck.
* A learned man without pupils, is a tree which bears no fruit; a devotee without good works, is a dwelling without a door.
* Keep thine eyes open, or Fate will open them for thee.
* He who keeps to his business, he who loves his companions, he who does his duty, will never be poor.
* A thousand regrets will not pay thy debts.
* To feel one’s ignorance is to be wise; to feel sure of one’s wisdom is to be a fool.
* One proof is better than ten arguments.
* Rain in the morn brings the sun after noon. He who weeps today, may laugh tomorrow.
* Every tree hath its shadow, every sorrow its joy.
* The fields are damaged by weeds, mankind by passion. Blessed are the patient, and the passionless.
* The virtuous man who is happy in this life, is sure to be still happier in his next.
* Let every man first become himself that which he teaches others to be.
* He who hath subdued himself, may hope to subdue others. One’s own self is the most difficult to master.
* Hatred is never quenched by hatred; hatred ceases by showing love; this is an old rule. [1]
* The best possession of the man of clay is health; the highest virtue of the man of spirit is truthfulness.
* Man walks on, and Karma follows him along with his shadow.
* Daily practical wisdom consists of four things: – To know the root of Truth, the branches of Truth, the limit of Truth, and the opposite of Truth.
* To enjoy the day of plenty, you must be patient in the day of want.
* Expel avarice from your heart, so shall you loosen the chains from off your neck.
* Let a man overcome anger by love, evil by good, greediness by liberality, lie by truth.
* Do not speak harshly to anybody; those who are so spoken to will answer thee in the same way.
* The avaricious go not to the world of the gods (Devas), for the fool commands no charity.
* The fool who is angered, and who thinks to triumph by using abusive language, is always vanquished by him whose words are patient.
* Truth is brighter than the sun; truth is the sunny day of Reason, and falsehood the mind’s dark night.
* All has an end, and will away. Truth alone is immortal, and lives forever.
* The light of all flesh is the sun; the light of the soul – truth everlasting.
* The fault of others is easily perceived, but that of oneself is difficult to perceive.
* Good people shine from afar like the snowy mountains; bad people are not seen, like arrows shot at night.
* Thoughts alone cause the round of rebirths in this world; let a man strive to purify his thoughts, what a man thinks, that he is: this is the old secret.
NOTE:
[1] This is one of the most famous axioms in the Dhammapada. (CCA)
000
On the role of the esoteric movement in the ethical awakening of mankind during the 21st century, see the book “The Fire and Light of Theosophical Literature”, by Carlos Cardoso Aveline.