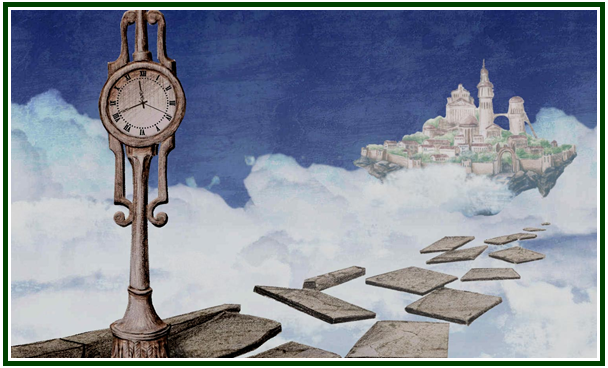 As the pilgrim goes ahead in the right direction, a stable ground seems to
materialize under his feet. Yet the firmness is more internal than external.
The apparently casual occurrence of events which have a beneficial nature does not really take place by chance. It is only the outer form of this phenomenon, known as Serendipity, that seems to be randomic.
There is no reason for a student of philosophy to have personal expectations about such happy events, for they can only occur in an enduring way when the time comes for the blessings of one’s good karma to emerge. And this happens on the basis of the law of Nidanas, or interdependent causation. Events are never isolated, although they may seem to be so to ill-advised individuals.
There exist luminous and blissful Chains of Causation, in which one can learn to take part by long-standing, self-devised, altruistic efforts.  Their stairs are golden: they point upwards towards an inner, unconditional happiness.
The main key to serendipity is therefore in the fact that one must first Sow under probationary conditions that which one wants to Harvest later.  If the sowing is consistent, long term and multidimensional, then the One Law will do the rest, and a lasting Serendipity will inevitably emerge, little by little perhaps, and in due time. Students of theosophy are protected by the Law of Equilibrium.
The Hedonistic Paradox
Often defined as the faculty of making fortunate discoveries by apparent chance, Serendipity implies an affinity with good karma. It is not a causeless event.  It results from one having accumulated the magnetism of vigilant harmony through right action during the time necessary for it to become visible.
Serendipity means a state of unity with contentment and the higher aspects of the law of equilibrium. This can only be obtained by transcending personal desire.
Studies in serendipity show its process is entirely different from the frustrating situations provoked by “the hedonistic paradox”, which establishes a fact everyone can see: the more one seeks for pleasure, the more pain one suffers. In other words, “the attempt to be happy at any cost ends in greater pain”.[1] This is one reason why Helena Blavatsky teaches in her article “Chelas and Lay Chelas” that one must “deserve, then desire”.
Serendipity has something in common with the mantras which belong to higher levels of consciousness. It is the syntony with a sort of luminous vibration that puts one in union with things desirable, yet not desired; with things good and fortunate, which are not objects of any personal attempt to obtain them.
This might be called “the paradox of wisdom”: by renouncing the desire for personal satisfaction, one attains a deeper sense of well-being. True bliss cannot be pursued; you must deserve it, and then let it come down to you in its own way and its own timing.
The Source of Serendipity
On the higher levels of conscious interconnectedness, serendipity naturally occurs.
The whole universe pulsates in subtle communion every second: its transcendent dimensions are bliss.
As one realizes that the lower aspects of connection and their corresponding pain do not deserve a “priority status”, both the precariousness and the transcendence of life are accepted.
Then one becomes available to the higher and enlightened dimension of life connections.
Serendipity is not really about finding objects. It is not about attachment and hope or ambition. It is not about personal happiness: it results from self-knowledge, self-forgetfulness and self-control.
As the pilgrim goes ahead in the right direction, a stable ground seems to materialize under his feet. Yet the firmness is more internal than external.
NOTE:
[1] “The Travels and Adventures of Serendipity”, by Robert K. Merton and Elinor Barber, Princeton University Press, USA, 2004, see p. 6.
000
The above article revises and combines the following short notes anonymously published in “The Aquarian Theosophist”:  “The Sacredness of Serendipity”, May 2013 edition, pp. 1-2; “The Occult Door to Serendipity”, July 2015 edition, pp. 6-7; “The Source of Serendipity”, October 2016 edition, p. 03.
000
In September 2016, after a careful analysis of the state of the esoteric movement worldwide, a group of students decided to form the Independent Lodge of Theosophists, whose priorities include the building of a better future in the different dimensions of life.
000