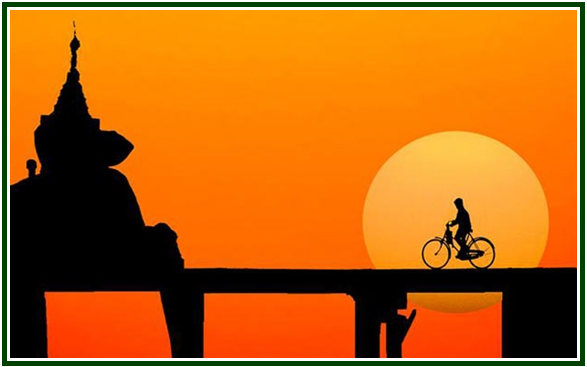 One should not deceive oneself: it is not enough to have an open mind and a broad theosophical view of life. One needs to have the necessary iron-clad will to win over oneself, that is, to defeat his own karma of accumulated ignorance. And this belongs to the vast territory of Raja Yoga.
One must get – in a natural way – to the moment when one realizes that it all depends on daily self-discipline. And then one must discuss with one’s own conscience exactly how one can improve discipline in the actual structure of one’s existence, hour-to-hour and minute to minute.
The daily life of an aspirant to Wisdom must not be an exercise in “involuntary action”. It has to unfold from within, as a voluntary process, and in this every obstacle provided by Nature and Karma must be always welcome by the learner.
To exact too much from oneself is naïve. To be too soft or indulgent makes one become a nominal theosophist, a words-only worker. As in a bicycle, equilibrium can only be found in movement, that is, in creative action. In order to learn theosophy, one must create and sustain stable and self-devised mechanisms of discipline which produce self-control and right action.  H. P. Blavatsky wrote:
“Theosophist is, who Theosophy does.” [1]
No theosophical idea and ideal can ever be stronger or more powerful – in one’s life – than the practical efforts and actions they inspire in one’s everyday existence.
NOTE:
[1] “The Key to Theosophy”, H. P. Blavatsky, Theosophy Co., Los Angeles, 1987, 310 pp., see p. 20.
000
The first version of the above note was published in the February 2013 edition of “The Aquarian Theosophist”. It had no indication as to the name of its author.
000
In September 2016, after a careful analysis of the state of the esoteric movement worldwide, a group of students decided to form the Independent Lodge of Theosophists, whose priorities include the building of a better future in the different dimensions of life.
000