A Fragment From the
Book “The Assault on Reason”
Al Gore 0000000000000000000000000000000000000000000
The following paragraphs are reproduced
from the book “The Assault on Reason”, by Al Gore,
The Penguin Press, New York, 2007, 308 pp., see pp.
33-35. They were also published at the February 2015
edition of “The Aquarian Theosophist”, pp. 5-7.
00000000000000000000000000000000000000000000000000
The principal way we now tell stories in our culture is over television. As I noted, forty years have passed since the majority of Americans adopted television as their primary source of information. As we’ve seen, its dominance has become so extensive that the average American spends two-thirds of his or her “discretionary time” (time other than working, sleeping, and commuting) watching television. And virtually all significant political communication now takes place within the confines of flickering thirty-second television advertisements.
Research shows that television can produce “vicarious traumatization” for millions. Survey findings after the attacks of September 11 showed that people who has frequently watched television exhibited more symptoms of traumatization than less frequent TV viewers. One analyst of this study said of respondents describing their reaction to 9/11, “Those who watched the most television reported the most stress.”
The physical effects of watching trauma on television – the rise in blood pressure and heart rate – are the same as if an individual has actually experienced the traumatic event directly. Moreover, it has been documented that television can create false memories that are just as powerful as normal memories. When recalled, television-created memories have the same control over the emotional system as do real memories.
And the consequences are predictable. People who watch television news routinely have the impression that the cities where they live are far more dangerous than they really are. Researchers have also found that even when statistics measuring specific crimes actually show steady decreases, the measured fear of those same crimes goes up as television portrayal of those crimes goes up. And the portrayal of crime often increases because consultants for television station owners have advised their clients that viewership increases when violent crime leads newscasts. This phenomenon has reshaped local television news.
Many of the national morning programs now lead with crime and murders, and we’ll watch them for hours because they are so compelling. The visual imagery on television can activate parts of the brain involved in emotions in a way that reading about the same event cannot.
Television’s ability to evoke the fear response is especially significant because Americans spend so much of their lives watching TV. An important explanation for why we spend so much time motionless in front of the screen is that television constantly triggers the “orienting response” in our brains.
As I noted in the Introduction [of the book ‘The Assault on Reason’], the purpose of the orienting response is to immediately establish in the present moment whether or not fear is appropriate by determining whether or not the sudden movement that has attracted attention is evidence of a legitimate threat. (The orienting response also serves to immediately focus attention on potential prey or on individuals of the opposite sex.) When there is a sudden movement in our field of vision, somewhere deep below the conscious brain a message is sent: LOOK! So we do. When our ancestors saw the leaves move, their emotional response was different from and more subtle than fear. The response might be described as “Red Alert! Pay attention!”
Now, television commercials and many action sequences on television routinely activate that orienting reflex once per second. And since we in this country, on average, watch television more than four and a half hours per day, those circuits of the brain are constantly being activated.
The constant and repetitive triggering of the orienting response induces a quasi-hypnotic state. It partially immobilizes viewers and creates an addiction to the constant stimulation of two areas of the brain: the amygdala and the hippocampus (part of the brain’s memory and contextualizing system). It’s almost as though we have a “receptor” for television in our brains.
000 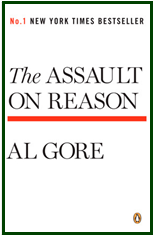 The book “The Assault on Reason”, by Al Gore, stimulates independent thinking.
000
On the role of the esoteric movement in the ethical awakening of mankind during the 21st century, see the book “The Fire and Light of Theosophical Literature”, by Carlos Cardoso Aveline.