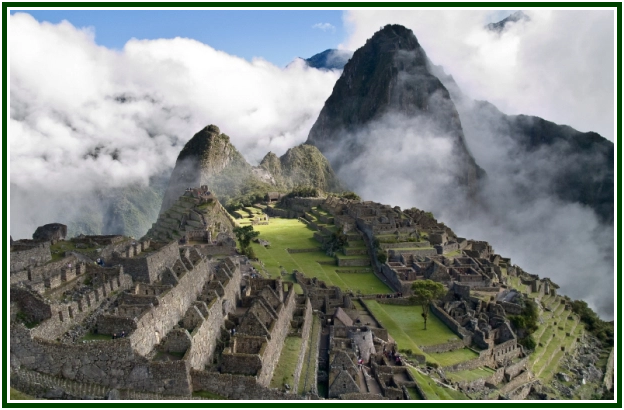 A photo of the Machu Picchu ruins, in Peru
The Andean Mountain Range and its wisdom tradition have a long-term significance in theosophy.
H. P. Blavatsky visited the Andes physically twice. [1] In April 1884, she wrote a letter to Mrs. Patience Sinnett with interesting information about the theosophical significance of the Andean cordillera.
While mentioning some Eastern Buddhist disciples of Esoteric Wisdom, H.P.B. explained that their Masters were not the ones who had directly inspired the foundation of the Theosophical Movement in 1875. Those chelas, she said, were “pure blooded Mongolian Buddhists”. One can infer that their Masters were Adepts related to the fourth race.
“Fourth race” is a rather complex theosophical concept. It refers to the abstract archetype of human beings during a previous moment in our evolution – and not only to their physical characteristics. [2] Present-day remnants of the fourth race include the Far East nations, Tibetans, Mongolians, as well as native peoples in South, Central and North America.
There is a broad unity among these nations situated in different continents and having different traditions. After mentioning some cultural limitations she saw in those specific Buddhist chelas, H.P.B. said:
“They are chelas after all, and there is much of the mortal man in them yet. (…) They are great friends with the native Peruvian, Mexican and Red Indian Adepts and chelas.” [3]
Peru is one of the main Andean countries in South America, and H.P.B. knew what she was writing about. In 1852 she had spent some time in the Andean Region, visiting many places and having contact with local sages.
During one of her trips to the Andes, H.P.B. visited the borderline between Brazil and Bolivia. In a particular location, she collected a handful of sand from a river with a few specks of gold in it. Driven by the strength of the waters, the gold had come from the Brazilian side of the borderline. For her own reasons, H.P.B. took the small sample of sand, not only the gold, with her to Europe. [4] This might have an occult and magnetic purpose. It is recorded in authentic esoteric literature that on another occasion a Master of the Wisdom asked his lay disciple Alfred P. Sinnett to do a similar task. The Mahatma wrote to Sinnett:
“Cannot you manage to pick up for me three pebbles? They must come from the shores of the Adriatic – Venice preferably; as near to the Dogal Palace as they can possibly be found; (under the Bridge of Sighs would be the most desirable but for the mud of the ages). The pebbles must be of three different colours one – red, the other black; the third white (or greyish). If you manage to get them, please keep them apart from every influence and contact but yours, and oblige ever yours…” [5]
An Intercontinental Esoteric School and Library
H.P.B. wrote rather extensively on Peru and the Andes in her text “A Land of Mystery”, and in the book “Isis Unveiled” [6].
In her masterpiece “The Secret Doctrine” she mentions the inner link connecting esoteric schools in South America (Andean region) and other parts of the world. H.P.B. writes:
“The members of several esoteric schools – the seat of which is beyond the Himalayas, and whose ramifications may be found in China, Japan, India, Tibet, and even in Syria, besides South America – claim to have in their possession the sum total of sacred and philosophical works in MSS. and type: all the works, in fact, that have ever been written, in whatever language or characters, since the art of writing began (…).” [7]
NOTES:
[1] On HPB having visited the Andean region twice, see “Isis Unveiled”, volume I, p. 597, upper half of the page.
[2] Theosophy teaches universal brotherhood and equality of rights of all nations, races, and of men and women of every social class, caste, or political ideology. There are no “superior” or “inferior” races in theosophy: all are the same, and humans souls are born successively in every root-race, along great spans of time.
[3] “The Letters of H. P. Blavatsky to A. P. Sinnett”, Theosophical University Press, Pasadena, California, 1973, 404 pp., see p. 85.
[4] “Isis Unveiled”, H. P. Blavatsky, Theosophy Co., volume I, p. 597, footnote.
[5] “The Mahatma Letters”, TUP, Pasadena, USA, Letter CXXIV, p. 453.
[6] “A Land of Mystery” can be seen in “Collected Writings”, H. P. Blavatsky, TPH, India/USA, volume II, pp. 301-343 and pp. 431-435. See also “Isis Unveiled”, H.P.B., 1988, Theosophical University Press, vol. I, pp. 590-599.
[7] “The Secret Doctrine”, H. P. Blavatsky, The Theosophy Company, Los Angeles, 1982, volume I, Introductory, p. XXIII.
000
Carlos Cardoso Aveline lived in Lima, the capital city of Peru, between 1975 and 1977. He visited Bolivia, Ecuador and Peru in different occasions after that.
000
In September 2016, after a careful analysis of the state of the esoteric movement worldwide, a group of students decided to form the Independent Lodge of Theosophists, whose priorities include the building of a better future in the different dimensions of life.
000