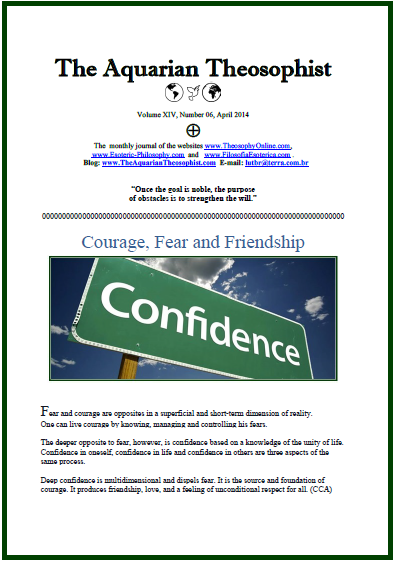 The opening sentence of “The Aquarian” says:
“Once the goal is noble, the purpose of obstacles is to strengthen the will.”
On page one, there is a note on “Courage, Fear and Friendship”: it says that the ultimate source of confidence is a knowledge of the unity of all life.
On page 2, Helena Blavatsky examines the issue of “Being Loyal to Adyar”. “The Daily Life of Blavatsky’s Esoteric School” is the topic on p. 3. On p. 4, “The Real Meaning of Contemplation”, the fragment of an article by Damodar Mavalankar. On p. 5 the reader finds an esoteric note by W. Q. Judge entitled “On Ethics and Occultism”. “The Power of Mantras” is on p. 6.
Other topics in the April edition include:
* “Differences Between New Age Ideas and Theosophical Teachings”, by an Associate of the ULT;
* “The Law of Habit”;
* “A Strategic View of Information”;
* “The Inner Temple Beyond a Baby Playpen”; and
* “The First Rules of Light on the Path”.
The 14 pp. edition includes the List of New Texts in www.TheosophyOnline.com and its associated websites.
Click here to see the April 2014
edition of “The Aquarian Theosophist”
000
You can find the entire collection of “The Aquarian Theosophist” in our associated websites.
000
On the role of the esoteric movement in the ethical awakening of mankind during the 21st century, see the book “The Fire and Light of Theosophical Literature”, by Carlos Cardoso Aveline.