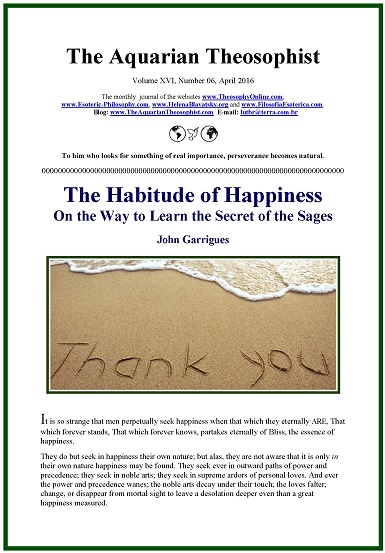 This is the opening thought of the April edition:
“To him who looks for something of real importance, perseverance becomes natural.”
On pp. 1-3 the reader finds John Garrigues’ article “The Habitude of Happiness”, whose subtitle is “On the Way to Learn the Secret of the Sages”. After that we have a note on the “Lessons That  Absurdities  Teach”: the topic involves a theosophical way to look at paradoxes and oxymora.  A few lines on p. 4 are enough for the note “On Knocking at the Door” to discuss Matthew, 7:7.
These are some of the other topics in the April edition:
* Of Sound, Silence and Meaning;
* Material Temples Are Profane;
* The Sage and the Probationer;
* The Cure for Anti-Semitism;
* The Leverage to Change Reality;
* The States of the Consciousness;
* The Causes of a Collapse;
* Carpe Diem, Seize the Day;
* The Atmosphere of Inner Noiselessness;
* Thoughts Along the Road;
* The Universality of Kahlil Gibran; and
* The List of New Texts in Our Websites.
The 17 pp. edition concludes with the “One Sentence From Shakespeare”: the English author died 400 years ago on 23 April 1616.
Click Here to Read
“The Aquarian”, April 2016
000
You can find the entire collection of “The Aquarian Theosophist” in our associated websites.
000
On the role of the esoteric movement in the ethical awakening of mankind during the 21st century, see the book “The Fire and Light of Theosophical Literature”, by Carlos Cardoso Aveline.