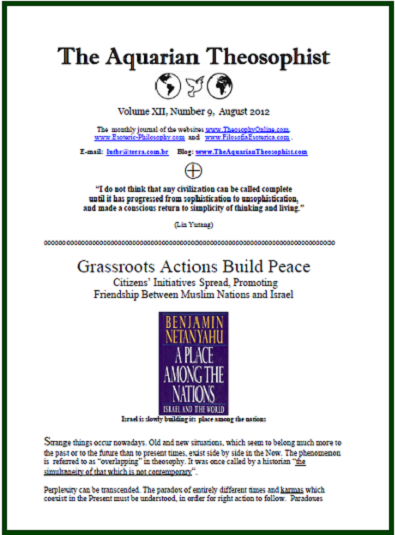 The issue begins with a special report on the Middle East, entitled: “Grassroots Actions Build Peace”. Its subtitle expands the idea: “Citizens’ Initiatives Spread, Promoting Friendship Between Muslim Nations and Israel”.
On page 5 there is a short, thoughtful article by John Garrigues called “Three Questions”.
“Rules for Daily Life – Thirteen Points for Self-Discipline” will be found at page 6. This is a text published by H.P.B. in 1880 whose main ideas have a decisive importance for students in the present century.
On page seven readers will find the article “G. Farthing, the Constant Theosophist”. It was written by Robert Kitto, of The Blavatsky Trust, UK, and shows why Geoffrey Farthing’s writings are probably the best tool in the Adyar transition from illusion to real theosophy, now and in the years ahead.
This edition publishes for the first time some Notes by G. Farthing which identify some of the main differences between the original theosophy and the “second generation” writings.
Then we have the List of Books available in our websites. On pages 16 and 17, H. P. Blavatsky writes on “The Seven Powers in Nature”. The text enlightens inner aspects of the sign of Virgo, in whose beginning the Sun is, while this edition circulates. On pp. 18 and 19, the news about a research project regarding comparative studies of the writings of two modern authors: Baron Münchhausen and Bishop Leadbeater. The edition closes with quotations from Robert Crosbie, H. P. Blavatsky and the Chinese writer Lin Yutang.
Click here to see the August 2012
edition of “The Aquarian Theosophist”
000
You can find the entire collection of “The Aquarian Theosophist” in our associated websites.
000
On the role of the esoteric movement in the ethical awakening of mankind during the 21st century, see the book “The Fire and Light of Theosophical Literature”, by Carlos Cardoso Aveline.