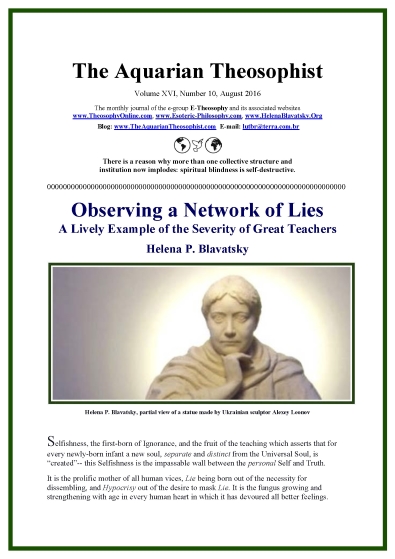 The opening thought of the August edition says:
“There is a reason why more than one collective structure and institution now implodes: spiritual blindness is self-destructive.”
On pages one and two we have an example of the severity of great teachers: “Observing a Network of Lies”, a fragment from Helena Blavatsky.
On page three, “Original Theosophy and the Life of Forests”, and “Cranston, on HPB’s Retreat Among Trees”. In the first of these two notes, HPB directly refers to those who are against environmental protection.
“The Aura of Trees, a Classical Text from 19th Century India” starts on page four. Page five presents “The Prayer of the Woods”. On pages six and seven the reader finds two fragments from Helena Blavatsky, entitled “On The Tree of the World”.
The notes “The Duty of the Pilgrim” and “Teachers of Altruism Can Be Found Anywhere, Any Time” are on page eight. On page nine, “The Cosmic Nature Of Timeless Change”: while superficial minds look for “novelties”, students of theosophy search for that which is eternal.
These are other topics in the August 2016 edition of the “Aquarian”:
* The Spark and the Fire, Living Words Enlighten the Soul;
* Defeating Nuclear Proliferation;
* The Elders and the Young Ones;
* Robert Crosbie on the Right Attitude;
* Staying Away from the Tides of Ignorance;
* Ideologies and the Theosophical Knowledge;
* Thoughts Along the Road;
* Lessons from the Void; and
* Karl Friedrich Krause, on the Unity of Mankind.
The 19 pp. edition presents the List of New Texts in the Associated Websites.
Click Here to Read
“The Aquarian”, August 2016
000
You can find the entire collection of “The Aquarian Theosophist” in our associated websites.
000
On the role of the esoteric movement in the ethical awakening of mankind during the 21st century, see the book “The Fire and Light of Theosophical Literature”, by Carlos Cardoso Aveline. 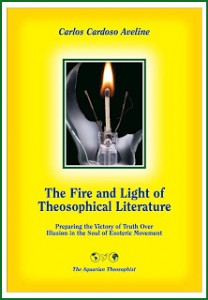