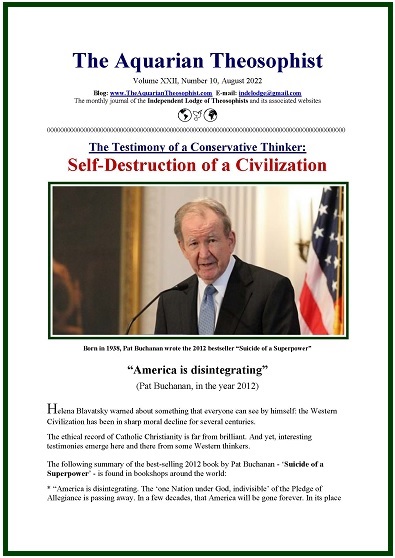 This is the Aquarian Theosophist for August.
Page one brings the article “Self-Destruction of a Civilization”, whose its first lines say:
“Helena Blavatsky warned about something that everyone can see by himself: the Western Civilization has been in sharp moral decline for several centuries.”
Page three presents “The Difficulty of Understanding the Obvious”: The Supreme Mystery Present in Commonplace.
Then you have “Besant and Jung in Esotericism”: Two Sources of Illusion for the Theosophical Movement.
These are other topics:
* A Prayer for My Companions Along the Path.
* Are You a Truth-Seeker?
* Thoughts Along the Road: The Law of Karma is Never in a Hurry, But It Rarely Postpones Anything.
* Four Paragraphs on Christianity and Civilization, by Helena P. Blavatsky.
* Concerning the Finer Powers of Perception – 02, by Francis Hutcheson.
* On the Story of Joshua Davidson: The Return of the Christ, Described in a Magnificent Novel. A text by Helena P. Blavatsky.
* Meditation on the Awakening of Mankind.
With 19 pages, the edition contains the List of New Items in the associated websites.
Click Here to Read
“The Aquarian” for August 2022
000
The above edition of The Aquarian was published on 12 August 2022. The entire collection of the journal is available HERE.
000
Give your friends a practical tool to better understand themselves and the world. Invite them to join the study-group E-Theosophy in Google Groups.
000