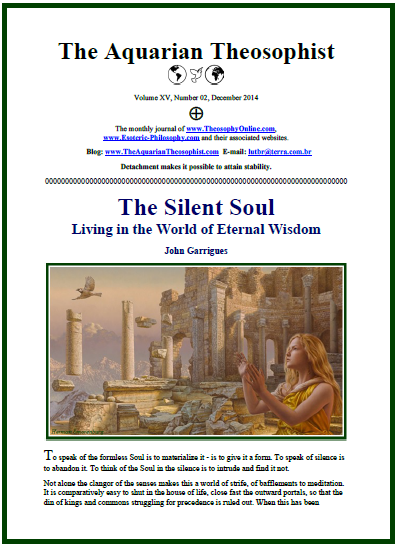 This is the opening sentence in the December 2014 edition:
Detachment makes it possible to attain stability.
On pp. 1-2 we see the article “The Silent Soul”, by John Garrigues. After that, a few lines by Radha Burnier on the positive side of crises.
On page 3, “Awakening in 2015: Questions and Answers on the Event”. Then we have “The Wisdom of the Foolish”, by Chinese author Lin Yutang, and “The Story of the Duckling”, by Anthony de Mello.
“The Source of Harmony” discusses the false dilemma between sweet hypocrisy and sheer violence: sincerity is the middle way between the two extremes. On p. 6, “Twelve Fragments from Musonius”. On p. 8, “When China Learns From Its Past”, by Joaquim Soares.
Other topics in the “Aquarian” for December include:
* A Few Untitled Verses by Kahlil Gibran;
* Thoughts Along the Road – Observing the Sacredness of Daily Life;
* Two Precepts from Helena Blavatsky;
* Questions and Answers: Karma, Unity and Friendship;
* The Balance Between Sowing and Harvesting; and
* Knocking at the Door of 2015: Christmas Eve and the New Year.
The 17 pp. edition concludes with the List of New Texts in our websites.
Click Here to Read
“The Aquarian”, December 2014
000
You can find the entire collection of “The Aquarian Theosophist” in our associated websites.
000
On the role of the esoteric movement in the ethical awakening of mankind during the 21st century, see the book “The Fire and Light of Theosophical Literature”, by Carlos Cardoso Aveline.