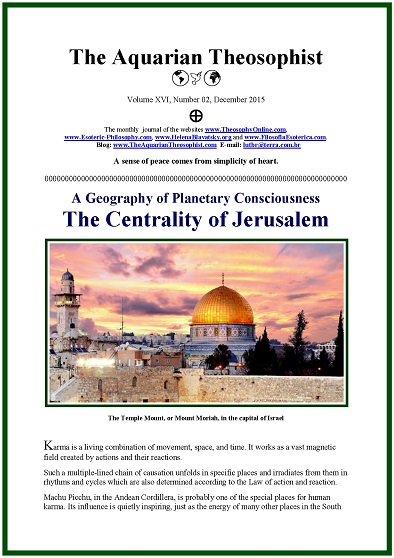 The opening thought of the December edition says:
“A sense of peace comes from simplicity of heart.”
On pp. 1-2, there is an article on “The Centrality of Jerusalem” in present human karma. Page 3 brings “Fragment From the Secret Doctrine: The Mystery of Eternity”. The note “Various Levels of Reading: Perceiving the Inner Silence Above Though” is on page 4.
Pages 5 and 6 present a few paragraphs from Helena P. Blavatsky on “Monotheism and Violence”. She says that There Has Never Been a Religion With Such a Bloody Record as Christianity.
These are other topics in the December edition:
* An Opportunity to Awaken: a countdown is ticking;
* Truth and the Law of Love: three Fragments From Alexei Khomiakov;
* The Use of Knowledge;
* The Power of Music: Ave Maria, with Helene Fischer;
* The Gradual Process of Victory: Self-Forgetfulness and Bliss;
* Saturn, the Master of Karma: a Time for Learning Self-Discipline;
* Before a Bright Dawning;
* Human Transmutation Towards 2023;
* The Cornerstones of Time;
* Thoughts Along the Road;
* “Taking Possession of Our Own Nature”, by Ivan Il’in;
* Inaugurating 2016: a New Horizon to All;
* A video on Christmas: what happens as the external Christmas takes place? ; and
* A broadening mind, according to the Yoga of Patanjali.
The 19 pp. edition includes the List of New Texts  in our websites.
Click Here to Read
“The Aquarian”, December 2015
000
You can find the entire collection of “The Aquarian Theosophist” in our associated websites.
000
On the role of the esoteric movement in the ethical awakening of mankind during the 21st century, see the book “The Fire and Light of Theosophical Literature”, by Carlos Cardoso Aveline.