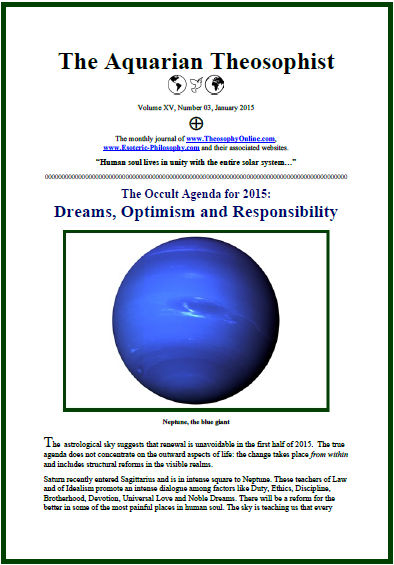 The opening thought of January 2015 edition says:
“Human soul lives in unity with the entire solar system…”
The article “The Occult Agenda for 2015: Dreams, Optimism and Responsibility” is on pp. 1-2. On p. 2, the note “The Power of the Humble”.
Then we have the note “Strengthening the Love for Truth, The Next Step for Some Theosophical Institutions”.
Page four brings “The Occult War: Our Minds as Disputed Territory”, and p. 5  presents “The Symbolism of Saturn’s Hexagon”.
“Peace as a Creative Movement” is on p. 6, and “Finding the Light on the Path” on pp. 7-14.
Other topics in the “Aquarian” for January 2015 include:
* Helena Blavatsky: Each Star and Planet is a Temple;
* The Key to Harmony;
* The Action and the Words: Eating Cutlery Is Not Good for the Teeth;
* Concentrating Magnetic Force;
* A Mahatma, on How Best to Study Theosophy; and
* Thoughts Along the Road.
The 20 pp. edition concludes with the List of New Texts in our websites.
Click Here to Read
“The Aquarian”, January 2015
000
You can find the entire collection of “The Aquarian Theosophist” in our associated websites.
000
On the role of the esoteric movement in the ethical awakening of mankind during the 21st century, see the book “The Fire and Light of Theosophical Literature”, by Carlos Cardoso Aveline.