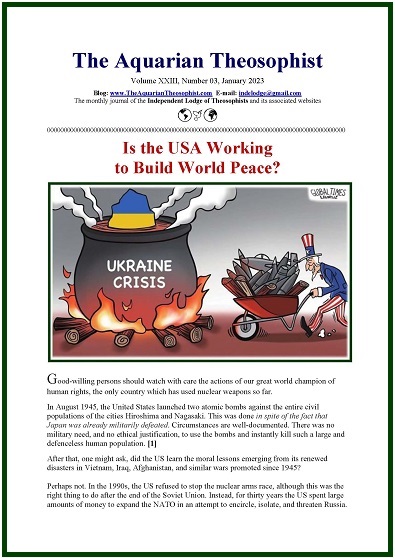 The front page of the January edition presents an uncomfortable question: “Is the USA Working to Build World Peace?”
The article says:
“Good-willing persons should watch with care the actions of our great world champion of human rights, the only country which has used nuclear weapons so far.”
“In August 1945, the United States launched two atomic bombs against the entire civil populations of the cities Hiroshima and Nagasaki. This was done in spite of the fact that Japan was already militarily defeated. Circumstances are well-documented. There was no military need, and no ethical justification, to use the bombs and instantly kill such a large and defenceless human population.”
On the other hand –
“The country has had great leaders and thinkers like William Penn, Benjamin Franklin, Abraham Lincoln and John F. Kennedy, to name a few. Its spiritual resources include extraordinary individuals like Martin Luther King Jr. It is still possible to stop a repeated mistake and reawaken to the practice of respectful cooperation.”
Is it the time now to have more respect for life?
On page three we have the historical speech on world peace delivered by John F. Kennedy, in 1963, a few months before being mysteriously assassinated.
Kennedy’s address contains a positive prophecy which theosophists know sooner or later will be a reality, one way or another: the liberation of the world from the nightmare of nuclear weapons.
Other topics in this edition:
* A Prayer for Our Planetary Community.
* Vasily Rozanov: On the Magic of Human Birth.
* Thoughts Along the Road: Each Winter Prepares a Springtime.
* Self-Control and Contentment – 02 (Concluded): How Far the Sensations, Appetites, Passions and Affections Are in Our Power, by Francis Hutcheson.
* Il’in, the Anticommunist Who Was Saved by Lenin – The Hegelian Thinker is Influential in Russia and Still Little-Known in the West.
* The “Los Angeles Times” tells the Story of the Unthinkable in Hiroshima and Nagasaki. A warning for present generations.
With 23 pages, the edition presents the List of New Items in the associated websites.
Click Here to Read
“The Aquarian” for January 2023
000
The above edition of The Aquarian was published on 11 January 2023. The entire collection of the journal is available HERE.
Give your friends a practical tool to better understand themselves and the world. Invite them to join the study-group E-Theosophy in Google Groups.
We believe in altruism. If you want to help spread theosophy and ethics in today’s world, send the Aquarian to your friends and tell them to write to the editors making a free subscription.
000