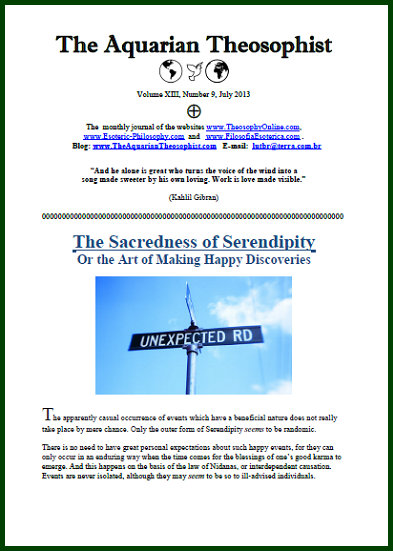 The July 2013 edition of  “The Aquarian Theosophist” opens with an article on Serendipity, the seemingly casual occurrence of happy events. In fact, happiness is not a randomic event.
What is the theosophical viewpoint regarding conflicts? Challenges are inevitable: according to the article “Unity and Contrast in Theosophy”, the higher levels of perception must accept, live, and transcend the multidimensional paradoxes of life.
A unique reflection on human struggle is to be found in Kahlil Gibran’s fragment “Speaking of the Effort”: “work is love made visible”.
Under the title “The Place of Miracles”, the talmudic tale about a fierce polemics between two rabbis, regarding the importance of outer phenomena, helps clarify the nature of truth and the way to obtain it. The discussion, it must be said, caused a profound environmental impact, which happened to disappear right away.
In his article “Reflections of All”, Kristan Stratos writes: “As we look into the clear mountain top lake, we see a perfect reflection on the still waters of the sky above. As we peer into the murky water of a city puddle we can catch a glimpse of the reflection of ourselves. (…) As we gaze deeply into ourselves we can see the reflection …. of the entire Kosmos.”
The note “On Harmlessness and Justice” says that ahimsa is not a show for the others to see, but an energy of the heart, and often invisible. It is also a battle that one can win every minute, hour – and decade.
A central point in the present edition is the essay “Looking Into Oneself -The Autobiographical Notes of an Indian Theosophist”, by N. C. Ramanujachary.
Having several books published in Telugu and English, Dr. N. C. Ramanujachary is currently the Joint General Secretary and Director of Studies for the Indian Section of the (Adyar) Theosophical Society, which has some 9,000 members. He lives and writes in the Besant Gardens of the Adyar Compound, in Chennai.
With 15 pp., the July edition includes two illustrated fragments from the theosophical literature. It concludes with the List of New Articles in www.TheosophyOnline.com and associated websites.
Click here to see the July 2013
edition of “The Aquarian Theosophist”
000
You can find the entire collection of “The Aquarian Theosophist” in our associated websites.
000
On the role of the esoteric movement in the ethical awakening of mankind during the 21st century, see the book “The Fire and Light of Theosophical Literature”, by Carlos Cardoso Aveline.