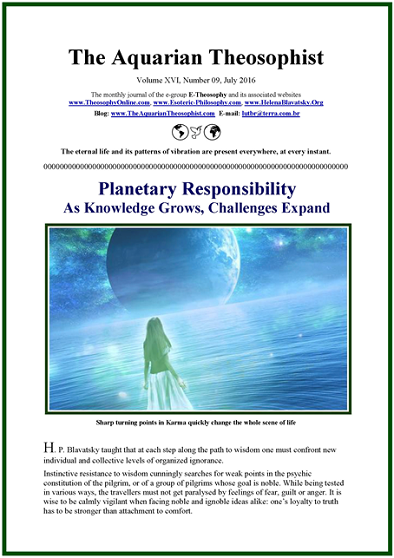 This sentence opens the July 2016 edition:
“The eternal life and its patterns of vibration are present everywhere, at every instant.”
On pages one and two we have the article “Planetary Responsibility: as Knowledge Grows, Challenges Expand”. From page three up to five, “The Ideal of a World Federation”.
Then comes “Donald Trump Wants a Respectful Relation Between the USA and Russia”. On page six we see “Preserving Access to Universal Wisdom”, and page seven presents the note “Brotherhood Among Nations: Sowing the Seeds of World Peace”.
“Man, Created from Stone in Deucalion and the Andes” is on page eight. The Deucalion myth deals with the moment when humanity had to entirely renew itself after a radical failure in Ethics. On page nine, “The Door that Is Never Closed”. On pages ten and eleven, “Disguising the Absence of Rational Arguments: Personal Attack as a Political Device”.
Other topics in the July 2016 edition include:
* Ecology, Moderation and Peace;
* Henry Vaughan Saw Eternity the Other Night;
* Augusto dos Anjos: A Philosopher’s Agony;
* Interrupting the Culture of Interruption;
* The Character of a Happy Life;
* The Courage to Be Independent;
* The Law of Conservation of Energy;
* Thoughts Along the Road;
* The Secret of the ULT; and
* Immanuel Kant: ‘Let Justice Reign’.
The 21 pp. edition presents the List of New Texts in the Associated Websites.
Click Here to Read
“The Aquarian”, July 2016
000
You can find the entire collection of “The Aquarian Theosophist” in our associated websites.
000
On the role of the esoteric movement in the ethical awakening of mankind during the 21st century, see the book “The Fire and Light of Theosophical Literature”, by Carlos Cardoso Aveline.