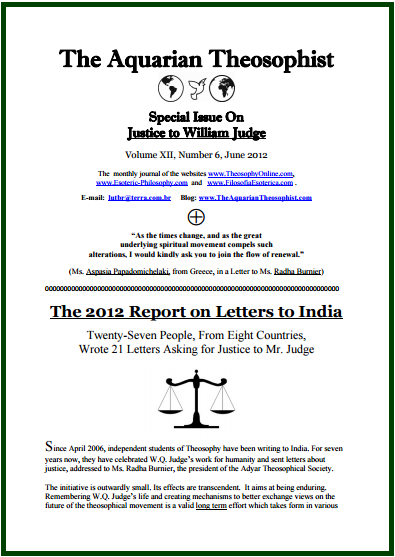 This is the June 2012 Special Issue of “The Aquarian Theosophist” on Justice to William Judge.
In the seventh year of letters to India on Justice to Judge, twenty-one letters were written to Ms. Radha Burnier in 2012, and they were signed by 27 people from eight countries.
While the number of letters and of people signing them fell in 2012, the number of readers and of people who accompanied the effort actually grew, for our associated websites vigorously expanded the number of their readers in the last 12 months. As time passes, each letter written gets therefore more influential.
This collective action is based on a feeling of confidence in the law of karma, and although seven years make such a short period of time, it has succeeded already in changing for the better a significant part of the international “mood” and atmosphere. According to the organizers, however, “a seven years’ period is like nothing; the movement has just begun.”
The complete text of the twenty-one  2012 letters to Ms. Radha Burnier is included in this special issue.
Click here to see the June 2012
(Special Issue) edition of “The Aquarian Theosophist”
000
You can find the entire collection of “The Aquarian Theosophist” in our associated websites.
000
On the role of the esoteric movement in the ethical awakening of mankind during the 21st century, see the book “The Fire and Light of Theosophical Literature”, by Carlos Cardoso Aveline.