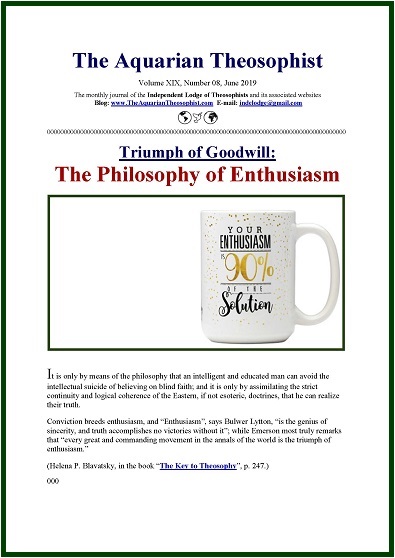 As the Sun is in Gemini and the Moon in Leo, the June edition of The Aquarian is made available to the public.
Page one brings us a few lines from Helena Blavatsky on The Philosophy of Enthusiasm.
The reflection continues on page two with the texts “The Depth of One’s Contentment” and “Mahatma Gandhi and the Law” (this one by S. Radhakrishnan).
On page three, “The Priority Must Be the Law”, by H.P. Blavatsky, and “A Course in Discipleship According to Masters”.
“Causes and Effects” and “A Classical View: Political Reforms and Theosophy” will be found on page four. After that, the article “On Loving One’s Country: Strong Local Communities Preserve Peace”, which is also published at our blog in “The Times of Israel”.  On page seven, “Theosophy and Nationalism”, by H. P. Blavatsky.
These topics are also examined in this issue:
* The Power of the Number Seven;
* The Process of Second Birth;
* S. Radhakrishnan – Preserving the Power of the Soul;
* A Lesson in Realism, on our Humanity;
* The Writings of an Eastern Master – 27;
* Our Arctic Region Is Now Melting;
* “Fragments from a Theosophist’s Writings”, by Robert Crosbie, the friendly pioneer who completed his incarnation 100 years ago on 25 June 1919; and
* Does a Community Reflect the Life of Its Members? Every Nation is a Mirror.
The June edition has 18 pages and includes the List of New Items at the associated websites.
Click Here to Read
“The Aquarian”, June 2019
000
The entire collection of The Aquarian is available at our associated websites.
If you want to help spread theosophy and ethics in today’s world, send the Aquarian to your friends; invite them to write to the editors making a free subscription of the journal.
000