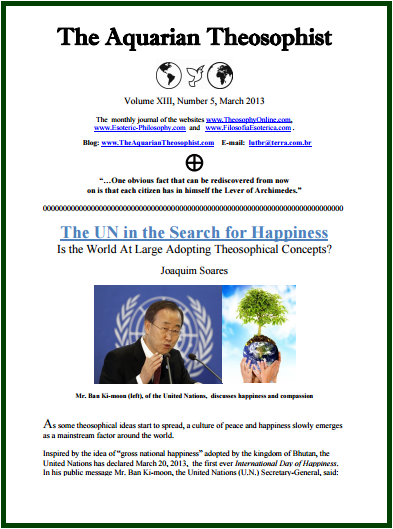 On pages 1-2, the news is that the United Nations has created an International Day of Happiness, and its general-secretary talks about Compassion. How fast is, then, the world at large adopting the main theosophical concepts?
On p. 3, the edition goes on to present an article by Steven H. Levy: “The Art of Living: Finding Balance”. John Garrigues is the author of “On Tolerance and Good Will” (p.4). After that, “Yoga as a System of Ethics” presents the four opening paragraphs from M. N. Dvivedi’s  Introduction to his classical version of the Yoga-Sutras, which H.P. Blavatsky considered excellent.
At pp. 8-9, the note “Using the Creative Power of Thought” discusses the best ways for a citizen to use a lever and change the whole world for the better.
“The Rising of a Higher Consciousness” is a fragment by Yogi Ramacharaka. It examines how each student can learn to transcend the instinctive mental region within him.
On p. 11, “The Aquarian” makes a yearly call to action under the title “Celebrating Justice to Judge in 2013: The Eighth Year of Letters to India”.
The March edition closes with “A Greek Society for Speaking the Truth”:  in 1890, in Athens, the association was a practical experiment in being utterly sincere.
Click here to see the March 2013
edition of “The Aquarian Theosophist”
000
You can find the entire collection of “The Aquarian Theosophist” in our associated websites.
000
On the role of the esoteric movement in the ethical awakening of mankind during the 21st century, see the book “The Fire and Light of Theosophical Literature”, by Carlos Cardoso Aveline.