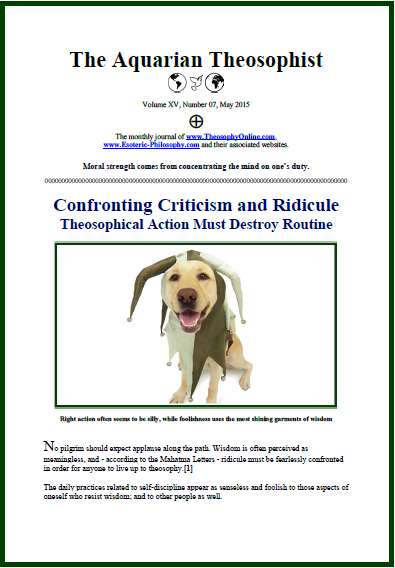 The opening thought says:
“Moral strength comes from concentrating the mind on one’s duty.”
On page one, the reader finds the note “Confronting Criticism and Ridicule: Theosophical Action Must Destroy Routine”. On page two, “Reexamining The White Lotus Day: Treason Can Sometimes Hide Behind a Homage”.
Page four brings “How Kindness Defeats Aggression: Theosophy and Humanist Psychology Unmask the Disease of Negative Thoughts”.
“Respect for One’s Fellow–Pilgrims” is published on page six, and page seven has “Cycle of Right Action Includes Time for Rest”.
Other topics in the May edition of the “Aquarian” include:
* No Separation Between The Divine and the Worldly;
* The Esoteric Side of Beagle Boys;
* Thoughts Along the Road: Observing the Sacredness of Daily Life;
* Two Fragments from Jean-Jacques Rousseau;
* “On Praise and Blame”, an article by John Garrigues; and
* Truthfulness and Patience in Judaism: a Few Ethical Principles.
The 17 pp. edition includes the List of New Texts  in our websites.
Click Here to Read
“The Aquarian”, May 2015
000
You can find the entire collection of “The Aquarian Theosophist” in our associated websites.
000
On the role of the esoteric movement in the ethical awakening of mankind during the 21st century, see the book “The Fire and Light of Theosophical Literature”, by Carlos Cardoso Aveline.