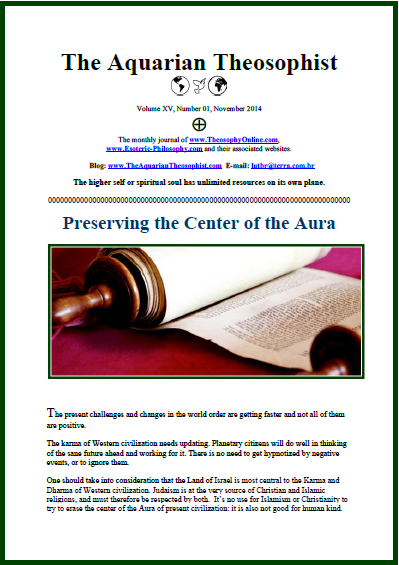 This is the opening sentence in the present edition:
“The higher self or spiritual soul has unlimited resources on its own plane.”
On page 1 the reader sees a note on the karma and dharma of Western civilization: “Preserving the Center of the Aura”. On p. 2, “The Dialogue Between Centre and Circumference”. Then, “A Ladder Between Earth and Sky”.
On p. 4,  the edition brings a poem by Kahlil Gibran entitled “Song of the Flower”.
“The Art of Avoiding Traps” is on p. 5. “The Jewish Esoteric Tradition” shows the natural affinity between Judaism and Theosophy. On p. 8, “Thoughts Along the Road”.
These are other topics in the “Aquarian” for November:
* The real significance of our efforts;
* Concentration provokes a revolution;
* The creative action of the past;
* The process of an event: awakening next year;
* The right time to act; and
* Mahatma denounces “theosophical” quietism.
The 18 pp. edition includes the  List of New Texts in our websites.
Click Here to Read
“The Aquarian”, November 2014
000
You can find the entire collection of “The Aquarian Theosophist” in our associated websites.
000
On the role of the esoteric movement in the ethical awakening of mankind during the 21st century, see the book “The Fire and Light of Theosophical Literature”, by Carlos Cardoso Aveline.