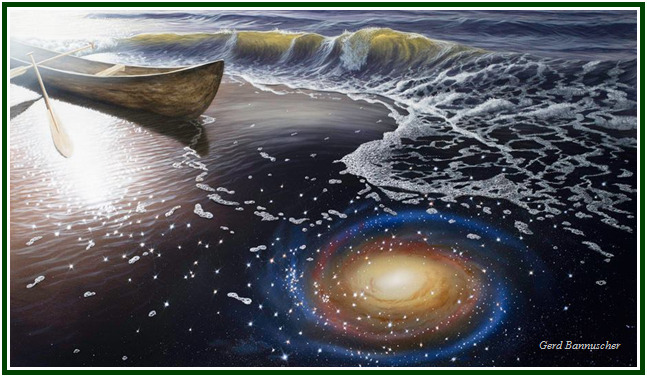 Om.
I will think now of the spirit of the cosmos and the universal law.
There are no boundaries in space or time. I’m an abstract nameless point and have no dimensions. I live in a small solar system in the Local Group of galaxies. My permanent address is the totality of existing things.
As a perception of the omnipresent Law expands, the personal idea is left aside and one’s will becomes stronger in natural ways. Now the unutterable peace of the One Life can be perceived, free of every form or image.
Across aeons of planetary lives, each soul inhabits the infinite space-time and does so according to Law.
Physical existence is intermittent: real life is eternal.
While fulfilling his daily duties, the pilgrim dwells in the permanent aspect of peace.
In the temple of one’s conscience, the sense of “I” is not separated from anything and feels attached to nothing. Each individual is an anonymous invisible center of self-responsibility. The law of mutual help gathers all beings together.
Forgetting oneself is an act of liberation: a union with the Law is achieved in the realm of non-self.
The feeling of impersonal duty stimulates a direct consciousness of one’s unity with the universe, and reveals the substance of eternal contentment.  One can always dwell in the inner harmony between eternity and the present moment.
Om, Shanti.
000
An initial version of “The Draft of a Prayer” was published in the October 2014 edition of “The Aquarian Theosophist”, pp. 1-2. It had no indication as to the name of the author.
000
On the role of the esoteric movement in the ethical awakening of mankind during the 21st century, see the book “The Fire and Light of Theosophical Literature”, by Carlos Cardoso Aveline.