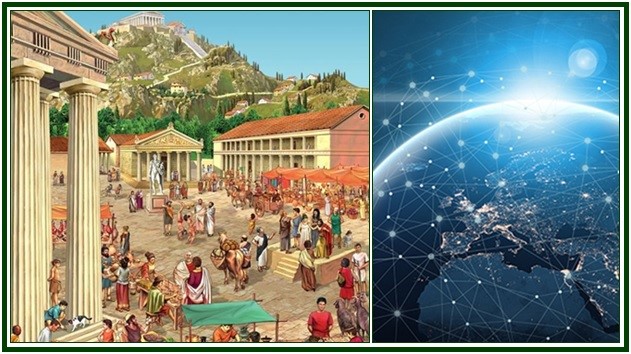 The Agora or meeting place in ancient Greece, and the planetary Agora of today
“Ethos”, says the Webster’s Unabridged Dictionary, is the fundamental character and spirit of a culture, or society.
Each nation has an ethos of its own. It possesses a common karma, a collective heritage which is shared by its citizens. Philosophical and theosophical schools of thought constitute a cross-national community which has its own sort of identity or “character”. Theosophical associations exist in some 70 or 75 countries, while there are more than 180 member-states in the United Nations.
Theosophists are still limited to small groups, but they already exist in a number of nations, and the ethos of many a country has been interacting for over a century now with some of the most fundamental tenets of esoteric philosophy.  The theosophical project of a planetary brotherhood as is old as mankind and its presence can be seen one way or another in most religions and philosophies.
The Internet is also cross-national and now offers every individual a potential contact with everyone else around the globe. In the international debate, people from many cultures add distinct flavors and viewpoints to the dialogue about human life and human future. New places around the planet – some of them situated in inner and non-geographical locations – emerge as active centers for the renewal of the movements that aim at the good of mankind. This brings about a variety of styles in action, in leadership, and in approaches to the duty and dharma of the humanistic effort.
The theosophical project is cross-cultural and inter-linguistic.  It transcends national limits, and it also respects them. It sees diversity and unity as necessary parts of life.
The search for esoteric wisdom occurs among people of different social classes, ages, and intellectual skills.  As more and more of human life gets transferred every year to the subtle online world that is part of the astral light, the democratic sharing of information and responsibility becomes more immediate and powerful.
The Internet is emerging as an efficient vehicle for a rational dialogue that occurs in harmony with inner contemplation. The online world is the great abstract Agora, the market-place of ideas and meeting-place for people. On it, nations and world-citizens of all kinds share thoughts, viewpoints, perplexities and experiential testimonies. A global ethos is in the making, and theosophy is part of the glue that holds it together and gives it its inner substance.
Ethics relates to ethos: it is a feeling of duty towards the collectivity we belong to; and by now everyone can see that our collectivity is the whole planet. Even our solar system cannot be seen as much more than the local village.
The theosophical movement can understand such a fact, and it must make a contribution to the building of a planetary ethos that is both rational and intuitive. Esoteric philosophy has a silent, invisible, but effective role to play in the global awakening. To the perception of this role the theosophical movement is awakening already. However, the process also follows the rule and the karma of each local Ethos. Some countries are more open to change than others.  The growth of a planetary awareness is no reason to dismantle nations. Although countries become more subtle in their substance, due respect for them is of the essence.
Some individuals and spiritual groups think they know already too much to learn anything from life. From other points of view, however, life is new all the time and it must be invented every day.
Learning is the main purpose of life, perhaps: learning the law of mutual help and solidarity. Things always happen according to Law, and they occur in the timing that best serves Law. There is no way to accelerate or slow down the dawning of the new day. The spirit and the people of each place and nation have much to contribute to the new global Ethos and its planetary Ethics. The lessons they teach are different, and we need all of them.
000
An initial version of “The Ethos of Global Citizenship” was published in the December 2012 edition of “The Aquarian Theosophist”, with no indication as to the name of the author.
000
Readers are invited to see in our associated websites the text “How Theosophy Transcends Tribalism”.
000
In September 2016, after a careful analysis of the state of the esoteric movement worldwide, a group of students decided to form the Independent Lodge of Theosophists, whose priorities include the building of a better future in the different dimensions of life.
000