A Spirit of Calm and Wisdom and Maturity
Lin Yutang 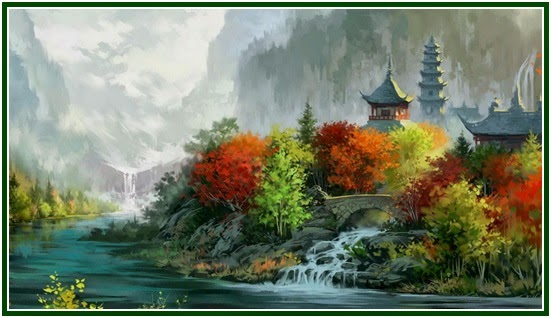 000000000000000000000000000
The following fragment is
reproduced from the book
“My Country and My People”,
by Lin Yutang, 1948 edition,
William Heineman Ltd., London
and Toronto,  419 pp., pp. 328-329.
0000000000000000000000000000000000
There comes a time in our lives, as nations and as individuals, when we are pervaded by the spirit of early autumn, in which green is mixed with gold and sadness is mixed with joy, and hope is mixed with reminiscence.
There comes a time in our lives when the innocence of spring is a memory and the exuberance of summer a song whose echoes faintly remain in the air, when, as we look out on life, the problem is not how to grow but how to live truly, not how to strive and labour but how to enjoy the precious moments we have, not how to squander our energy but how to conserve it in preparation for the coming winter. A sense of having arrived somewhere, of having settled and found out what we want. A sense of having achieved something also, precious little compared with its past exuberance, but still something, like an autumn forest shorn of its summer glory but retaining such of it as will endure.
I like spring, but it is too young. I like summer, but it is too proud. So I like best of all autumn, because its leaves are a little yellow, its tone mellower, its colours richer, and it is tinged a little with sorrow and a premonition of death. Its golden richness speaks not of the innocence of spring, nor of the power of summer, but of the mellowness and kindly wisdom of approaching age. It knows the limitations and its richness of experience emerges a symphony of colours, richer than all, its green speaking of life and strength, its orange speaking of golden content and its purple of resignation and death. And the moon shines over it, and its brow seems white with reflections, but when the setting sun touches it with an evening glow, it can still laugh cheerily.
An early mountain breeze brushes by and sends its shivering leaves dancing gaily to the ground, and you do not know whether the song of the falling leaves is the song of laughter or of parting tears. For it is the Song of the Spirit of Early Autumn, the spirit of calm and wisdom and maturity, which smiles at sorrow itself and praises the exhilarating, keen, cool air – the Spirit of Autumn so well expressed by Hsin Ch’ichi:
In my young days,
I had tasted only gladness,
But loved to mount the top floor,
But loved to mount the top floor,
To write a song pretending sadness.
And now I’ve tasted
Sorrow’s flavours, bitter and sour,
And I can’t find a word,
And I can’t find a word,
But merely say, “What a golden autumn hour!”
000
There is in our associated websites another text on the philosophical lessons one can learn from Autumn. It was written by Carlos Cardoso Aveline, and its title is “Renunciation Is Freedom”.
000
In September 2016, after a careful analysis of the state of the esoteric movement worldwide, a group of students decided to form the Independent Lodge of Theosophists, whose priorities include the building of a better future in the different dimensions of life.
000