Summing Up the Rules of Sacred Learning
Carlos Cardoso Aveline 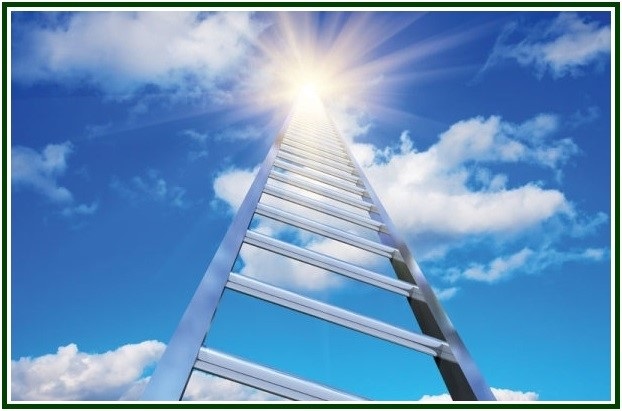 A ladder to the highest
Robert Crosbie wrote:
“An open mind, an eager intellect, without doubt or fear, is the unveiled spiritual perception.”[1]
Crosbie was thus commenting the opening words of the “Golden Stairs”, a document Helena Blavatsky shared with her esoteric students in the 19th century.
The Stairs constitute a summary of the rules to be followed by aspirants to discipleship in Eastern esoteric tradition. It is a short and decisive text. Students use to memorize its words, in order to have a permanent access to it – anytime, anywhere.
A few introductory sentences precede the Stairs. Although most people do not pay attention to them, these ideas are of fundamental importance in the eyes of those who have good sense.
The introduction clarifies:
“He who wipeth not away the filth with which the parent’s body may have been defiled by an enemy, neither loves the parent nor honours himself.  He who defendeth not the persecuted and the helpless, who giveth not of his food to the starving nor draweth water from his well for the thirsty, hath been born too soon in human shape. Behold the truth before you.”
Then the Golden Stairs say:
A clean life,
an open mind,
a pure heart,
an eager intellect,
an unveiled spiritual perception,
a brotherliness for one’s co-disciple, [2]
a readiness to give and receive advice and instruction,
a loyal sense of duty to the teacher, [3]
a willing obedience to the behests of truth, once we have placed our confidence in, and believe that teacher to be in possession of it;
a courageous endurance of personal injustice,
a brave declaration of principles,
a valiant defence of those who are unjustly attacked, and
a constant eye to the ideal of human progression and perfection which the secret science (Gupta-Vidya) depicts –
these are the golden stairs up the steps of which the learner may climb to the Temple of Divine Wisdom. [4]
The exact sequence of the Golden Stairs is not necessarily rigid, in its application to the life of a student. Any specific stair can be seen as the first one. That will depend on the temperament of the pilgrim and the ethical challenges he faces at a given moment.
Every stair contains, in a way, all the others.
Such a golden ladder has been used since ancient time by students of the esoteric wisdom.  It works as a powerful mantra, because it sums up the “path to heaven” which one must tread. Many an apprentice uses to repeat these axioms, slowly examining the practical implications of each one of them, in the present scenario of his life.
When looked at from the point of view of their essence, the Golden Stairs correspond to the ladder of Jacob, which combines the celestial and terrestrial levels of consciousness (Genesis, 28: 11-12). The Stairs also have much in common with the Golden Verses of Pythagoras. [5]
The different approaches to the inner awakening of one’s soul refer to Antahkarana, the “bridge” or ladder existing in the consciousness of each individual, according to Blavatsky’s theosophy, and whose function is to connect his lower self to his higher self; the mortal mind – to immortal spirit.
NOTES:
[1] “The Friendly Philosopher”, Robert Crosbie, Theosophy Company, Los Angeles, 416 pp., 1946, p. 37.
[2] Every living being is our co-disciple. All are companions in soul-learning.
[3] Who is the teacher? The work “Light on the Path”, which has essentially the same source as Golden Stairs, clarifies: “Intelligence is impartial: no man is your enemy: no man is your friend. All like are your teachers.”  (“Light on the Path”, Theosophy Co., India, p. 24.) However, there are sacred and central sources of spiritual teaching, and one’s access to them must be obtained and preserved. The idea of this verse could also be expressed thus: “a loyal sense of duty to the source of the teaching and inspiration”. For the source is not personal, and it is not motionless. The source may be found in different places and forms. Yet it must be respected in one’s heart, for one to deserve and to preserve contact with it. It is the inner affinity that provides the magnetic conditions necessary to learn from an elevated source of wisdom.
[4] “Collected Writings”, H. P. Blavatsky, TPH, India/USA, volume XII, p. 503. The Golden Stairs have been divulged in various other publications.
[5] See the Golden Verses of Pythagoras in our associated websites.
000
An initial version of the above article was published with no indication as to the name of the author at the March 2019 edition of “The Aquarian Theosophist”, pp. 1-3.
“The Golden Stairs” was published as an independent item in our associated websites on 12 March 2019.
000
Click to read the article “Commentaries to the Golden Stairs”.
See other texts on Mahatmas, Disciples and the Search for Discipleship.
000